From a piece in the Hartford Courant entitled Wethersfield Library Begins ‘Food For Fines’ Program:

For a limited time, Wethersfield Library patrons can pay their overdue fines with a can of beans or a jar of spaghetti sauce.

The library’s Food for Fines program, which began Monday and lasts through the end of August, donates the items to the town’s food bank, Library Director Laurel Goodgion said. The library runs the program every year, she said.

“People like doing it,” Goodgion said. “It gives them a way to feel good paying off their fines.”

I have always been a person who doesn’t mind paying fines for overdue books. I’ve always considered it my way of supporting the library. And because I’m never borrowing a new release, the books that I borrow are presumably not in demand. No one else is waiting for them when I am finished reading. I’ve never been accused of making another patron wait for a book.

In my mind, my fines have always been favors for the library.

Some librarians have disagreed. 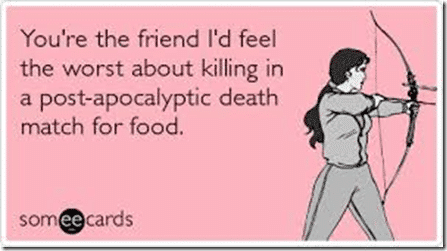 While I admire and respect librarians a great deal, I have run into one or two in my time who become genuinely angry when I return an overdue book. It typically occurs when the librarian attempts to scold me for my tardiness, and I respond with a smile and a comment over how happy I am to pay the fine.

One time the discussion became so heated that I stormed out of the library and charged into the restroom in the outer hallway, only to find myself standing over a half-naked woman sitting on the toilet.

Her fault for failing to lock the door on the single occupancy restroom, but had I not been so angry, I may have offered a courtesy knock before entering.

While I understand that one of a librarian’s duties is to safeguard books and other media on behalf of the general public, I have never understood the emotional response that has occasionally greeted me.

The system of overdue fines serves a purpose. If I am late in returning a book, the library (and thereby the general public) is compensated for my lateness.

And it’s not as if I’m paying a fine for speeding or failing to stop at a crosswalk, which endangers the lives of others. It’s a fine for a book that I kept for three extra days.

Can’t we be a little happy that the book is being returned along with some unexpected cash?

I’d even be happy to pay more. Increase the fines if necessary. I’m more than happy to contribute to the library. Perhaps the increased fine would increase my chances of returning the book on time. At the very least, it may give librarians a reason to smile while collecting the fine, knowing the money will support the institution that they and I love.

Am I wrong about this?