Filled with humor and sweetness, Unexpectedly, Milo reminds us that happiness can be found in the strangest of places. — BookPage 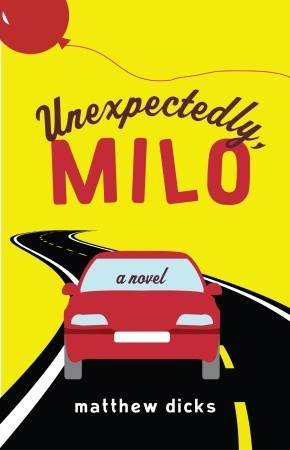 The author of SOMETHING MISSING returns with another hilarious and sneakily profound tale about a man whose behavior is truly odd, but also oddly relatable.

Milo Slade, a thirty-three year old home healthcare aide, is witnessing the rapid dissolution of his three-year marriage to a polished, high-powered attorney named Christine. Though Milo doesn't quite know the root of his marital problems, he inevitably blames himself, or more specifically, he faults the demands his obsessive compulsive personality place upon him--the need to open a jar of Smuckers grape jelly or sing 99 Luftballons in front of an audience, to name just a couple.

Yet Christine is still none the wiser about these inexplicable quirks as Milo has painstakingly hidden them from her and everyone else for years. No one knows the true--and in his mind more insidious--Milo, and such is the root of his profound loneliness, especially now that he and Christine are living apart during a trial separation.

Then one day Milo stumbles across a video camera and tapes, left behind in a park. He watches the first tape, which is a heartfelt confessional by a young woman who begins to reveal her secrets, starting small at first, and finally revealing that she blames herself for a tragic death of a friend. But not all the details add up and Milo is struck with the urge to free the sweet confessor from her guilt. He is, after all, an expert in keeping secrets…

In typical screwball fashion, Milo sets out on a cross-country journey to crack the case, but quickly gets sidetracked as his un-ignorable demands call. But it is during these sidetracks that the true meaning of his adventure takes shape. Milo is weird, but as he discovers, so is everyone else. UNEXPECTEDLY, MILO is a humorous and touching novel about finding oneself, embracing the journey, and, unexpectedly, love.

UNEXPECTEDLY, MILO by Matthew Dicks was mentioned in the New York Times Sunday Book Review by Marilyn Stasio, August 13, 2010: “Life is just one crazy chore after another for an obsessive-compulsive wreck like Milo Slade. A sweet-tempered nurse whose specialty is caring for homebound geriatrics, he’s the hero of Matthew Dicks’s offbeat novel, UNEXPECTEDLY, MILO (Broadway, paper, $14.99). When Milo isn’t able to make it to a bowling alley where he can bowl a strike or to a karaoke bar to sing “99 Luftballons” in German, he’ll dip into his emergency stash of grape jelly jars and get some fast relief by popping their pressure caps. But keeping his increasingly irrational needs a secret from his wife has put such a strain on their marriage that Milo is currently living on his own.
The chance discovery of a video camera and a set of confessional tapes made by a woman who has long held herself responsible for the disappearance and probable death of a childhood friend inspires Milo to put his O.C.D. to better use by tracking down the lost friend. The methodical ways he has adopted in pursuit of his weird impulses make Milo a good detective. And if he should find a bit of happiness on his quixotic quest, doesn’t the poor guy have it coming?”

UNEXPECTEDLY, MILO  by Matthew Dicks was reviewed by BookPage: “When it comes to endearingly odd protagonists, no one beats Matthew Dicks….Reading a Matthew Dicks novel always proves to be an unadulterated joy, and Unexpectedly, Milo, is no exception. Dicks’ gift lies in his ability to take superficially eccentric characters and dig beneath their peculiarities to develop full-bodied, lovable human beings. Rather than feeling gimmicky, Dicks' approach to his his characters’ off-center habits provides insight into broader truths on human nature and the things that make us tick. Readers join Milo on a riveting and tender voyage into the heart of insecurity—the fear we all carry inside us that no one will ever truly accept us for who we are. Filled with humor and sweetness, Unexpectedly, Milo reminds us that happiness can be found in the strangest of places.” Read the full review: http://www.bookpage.com/books-10013543-Unexpectedly%2C+Milo

UNEXPECTEDLY, MILO by Matthew Dicks was reviewed the Wall Street Journal: “The contemporary Connecticut of Matthew Dicks's amusing and engaging second novel, "Unexpectedly, Milo," is a...whimsical place...,yet it is a slightly disturbing place, too.... Whether Milo himself will ever achieve a comparable equilibrium and happiness is part of the cosmic mystery surrounding this unexpectedly endearing hero, whose self-chosen motto is: "I'm not crazy, I'm just colorful." Read the full review: http://online.wsj.com/article/SB10001424052748704017904575409481139515318.html

UNEXPECTEDLY, MILO by Matthew Dicks was reviewed by the hugely popular website Daily Candy: “Dicks manages to make us laugh out loud with crazed characters, like Linda, the pancake saleswoman, and Macy, a busty Southern waitress. The end result: an adventure of a summer read you’ll never put down.” Read the full here: http://www.dailycandy.com/all-cities/article/85171/Unexpectedly-Milo-by-Matthew-Dicks

UNEXPECTEDLY, MILO by Matthew Dicks was reviewed by Publishers Weekly: “Milo proves to be a pretty charming  character.”

“Unexpectedly, Milo is a novel of secrets and odd desires, as touching and idiosyncratic as its main character.” – Elena Gorokhova, author of Mountain of Crumbs

“Unexpectedly, Milo will satisfy your every demand for humorous fiction that is also nail-bitingly suspenseful (Will Milo get the girl? Which girl?) and infinitely understanding of the weirdo inside each and every one of us. This is a novel that leads with the heart and settles in your brain. Movingly funny. Deceptively profound.” – James Landis, author of The Last Day