I teach my students many important things in the course of a school year:

If you try to get tagged in a game of tag, no one likes you.

Licking the cheese dust out of the inside of a Doritos bag is a good way to lose friends.

If you’re not early, you’re late.

Always keep an extra pair of socks in your bag because the world is filled with unexpected puddles.

Yes, you can always vote for yourself. Don’t ever ask that question again.

I also teach them the importance of the long game when it comes to pranks. The longer, the better. I’m currently in the midst of a prank almost 15 years in the making. When it finally pays off, it’s going to be amazing.

I recently learned about one of the most impressive long game pranks in all of history. I can’t wait to tell next year’s class of students about this prank.

In 1956, during the filming of “The Swan” in North Carolina, Alec Guinness was presented with a tomahawk by a local Native American tribe. Enjoying a good prank, Guinness tipped the porter at co-stars Grace Kelly’s hotel to slip the tomahawk into her bed.

Years passed. Grace Kelly left acting to marry the Prince of Monaco. Then, one night in London, Guinness returned home to find the same tomahawk between the sheets of his own bed.

Nobody, including his wife, had any idea how it got there.

A few more years passed. Then, while Kelly was touring the United States, performing a series of poetry readings with actor John Westbrook, Guinness sent the tomahawk to Westbrook, who once again managed to place it in Grace Kelly’s bed.

In 1980, the tomahawk reappeared again, this time in Guinness’ bed at California’s Beverly Wilshire Hotel after he received an honorary Oscar at the Academy Awards ceremony. Kelly didn’t attend the ceremony, so how the tomahawk found its way back to him remains a mystery.

A year later, Kelly traveled to Chichester, England to give a reading with Westbrook once more. This time the tomahawk found its way into Kelly’s open suitcase, buried within her lingerie.

Grace Kelly returned to Monaco with the tomahawk but died in a car accident on September 14, 1982, thus bringing an end to their 25 year old prank.

Best part about the prank:

Neither Alec Guinness nor Grace Kelly ever acknowledged the prank to the other. Not a word was ever spoken between the two of them about the tomahawk. Though they remained friendly for the rest of their lives, the prank was never a topic of discussion.

It wasn’t until after Kelly’s death that Alec Guinness told the story.

Alec Guinness starred in great films like The Bridge On The River Kwai, Lawrence of Arabia, Doctor Zhivago, and Star Wars.

Grace Kelly starred in classics like Rear Window, Dial M for Murder, High Noon, and To Catch a Thief.

I think their perfectly executed, quarter century prank was just as impressive.

We could all learn a lot from Grace Kelly and Alec Guinness. 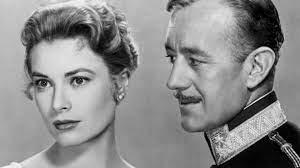