I bought a tube of Pillsbury biscuits.

I had never purchased this product before. Elysha added it to our shopping list, which meant I needed to make a reasonable guess as to its location as I planned my path through the grocery store.

I don’t mess around when it comes to grocery shopping. I’ve always been someone who shops as quickly as possible, recognizing that time spent in a grocery store is time wasted.

When I’m lying on my death bed someday, I will be wishing for more time in the grocery store, so I spend as little time in that place as possible.

But during this pandemic, I am vigilant and speedy beyond compare. I plan every step of my journey up and down the aisles before ever entering the store. I enter the building armed with hand sanitizer and Clorox wipes and a preplanned route in my mind. I hold my breath when passing another human being, strategically choosing the location of my next breath.

One of my super powers is the ability to hold my breath for an exceedingly long time. I have terrified Elysha, my children, and many lifeguards in the past by remaining underwater for uncommonly long periods of time. I do the same in the grocery store, breathing only when no other person is around and often leaning into corners, freezer cases, and other spaces where it was less likely for another person to have been previously standing.

It sounds crazy, I know. But I’ve also suffered from PTSD for nearly 30 years. For the past three decades, I’ve believed that an unseen force will someday arrive and try to kill me, which has made me vigilant beyond compare.

Turns out I was right. I had always assumed that the unseen force would be some facsimile of the men who put guns to my head back in 1992.

Instead, it was a virus.

I’ve been planning for this catastrophe for years.

So every movement in the grocery store is preplanned. It’s the space I currently enter that contains the most human beings in a given day in an enclosed space, so I want to spend as little time as possible in that space. I also shop early, on weekdays, when almost no one is inside the store.

My current record time for my weekly shopping run is 22 minutes, 12 seconds, which I set this week.

This goal went haywire last week when I could not find the Pillsbury biscuits. They were not in any of the places that I had predicted, forcing me to abandon my cart near the checkout and backtrack. I checked two other probably locations in the store before stumbling upon the damn things at the rear of the store near the butter.

A stupid place for biscuit mix if you ask me.

Why do I tell you all this?

While bringing the groceries into the house, the biscuit mix, which had forced me to spent 10 additional minutes in the grocery store and raised my stress levels significantly, fell out of the bag and into the cup holder in the rear door of my car.

I did not see this happen. There the biscuit mix sat for the next few days.

Then a heatwave struck Connecticut. Temperatures climbed to nearly 100 degrees. Certainly much hotter than that inside my car.

So the tube of biscuit mix exploded, sending the mix flying throughout the backseat in small globules, landing on hot surfaces like the seats and door.

Then it began to cook.

When I found the results of this explosion yesterday, it wasn’t a gooey mess. It was biscuits. Dozens of tiny biscuits, stuck to the surface upon which it has landed. I actually tasted one. It wasn’t bad.

All of this is my way of saying that 2020 has been and continues to be a strange, strange year. 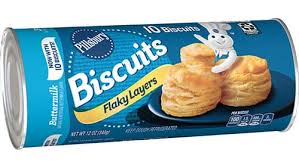