As I’ve made clear, I am an enormous fan of the “I told you so,” going to far as to have an “I told you do” calendar.

What I would like to see is more of the reverse “I told you so.”

For example, about ten years ago one of my friends began having children. As he talked about fatherhood, he described the frustration of having his children climbing into his bed all the time, essentially kicking him out. He told me how long it took to extricate his infant children from his bedroom and how there were weeks when at least one and sometimes more of his kids spent the night crowding him out of his bed.

I told him at the time that when I had kids, they would never sleep in my bed, and I would be sure that my infant children were in their own rooms as quickly as possible.

He scoffed at these notions. Told me that I was clueless. Laughed at my stupidity.

Fast forward ten years. I have a five year-old daughter and a two year-old son. Both were sleeping in their own bedrooms a few months after being born, and neither sleeps or has ever slept in our bed. 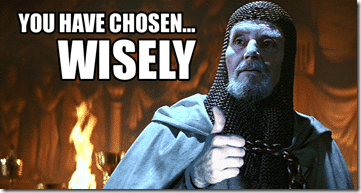 In fact, when we tried to convince our daughter to sleep in our bed after a head injury required me to check on her every hour, she refused.

My friend recently asked me how the sleeping turned out. He asked with a smirk on his face, expecting that his claims about my cluelessness and stupidity would be validated at last.

His smirk slid off his face. He said, “I’m surprised.”

That’s all he said.

After enjoying a decade of self-assurance and self-righteousness, all I received was an “I’m surprised.”

What I wanted to hear was something along the lines of, “It turns out that you were right.” Or “I guess I was the one who was clueless and stupid after all.” Or “I wish I could be more like Matthew Dicks and less like me.”

The reverse “I told you so.”

The words that one should offer when you discover that you weren’t so smart after all.

Let’s all embrace this concept.