While I am certain that I have made more mistakes than I can possibly remember, one mistake stands above all others in the pantheon of errors:
After promising my third graders a treat for a job well done, I substituted the popsicles that I had promised with what I thought was an equally appetizing alternative:

A box of Sun-Maid raisins. 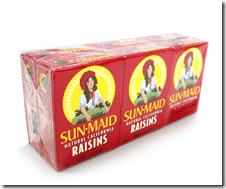 For reasons that I can no longer fathom, I thought that dried grapes were healthier than popsicles and just as tasty.

Never before have I been more despised by a group of people, and that is saying a lot considering my history.

Some of the kids tossed them into the trash without ever opening the box.

Others publicly traded their raisins for balls of crumpled paper, broken crayons and eraser nubs just to make me feel bad.

I swear that one kid almost cried.

Those kids eventually found their way to loving me again, but they never forgave me.