This photo, taken in September of 2004 at Camp Jewell in Colebrook, CT, was handed to me by a fifth grader last week. “My mom wanted you to see this,” she said.

Her mom is sitting in the front row of the photo, all the way on the right, huge smile on her face. She was my student way back in 2001 when I was teaching third grade, and was a fifth grader when this photo was taken.

This means that I’ve been teaching in my school long enough to have the daughter of one of my former students in the classroom across the hall.

I can’t tell you how disturbing this is to me. 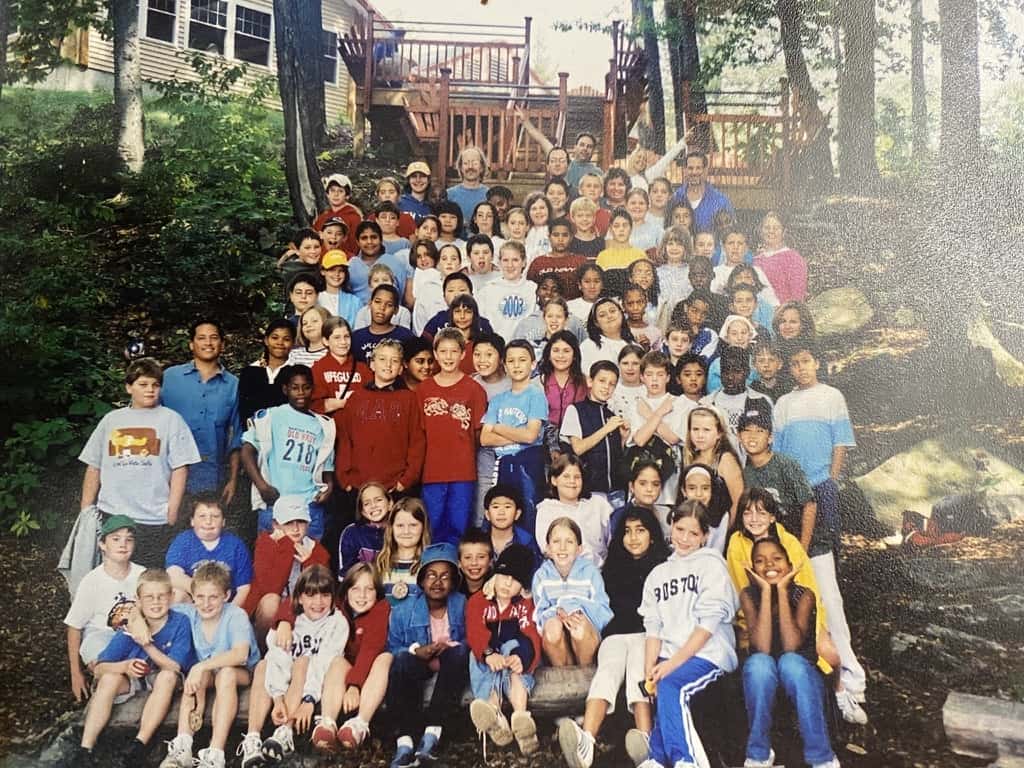 The photo itself is far less disturbing. If you look closely, you can see Elysha on the top left, wearing a yellow baseball cap. You may have noticed that she hasn’t aged a bit, so she’s clearly made some deal with the devil.

Elysha is standing beside Rob, our now retired vocal music teacher. In three years, he will be playing the ceremony music – all Beatles tunes – at our wedding.

Standing to the left of Rob is Andy, who was teaching instrumental music at the time and is now the Director of Performing Arts in our school district. In three years, he’ll also be playing music at our wedding ceremony.

Near the top, on the far right, is Plato, our now retired principal. In three years, he’ll be standing beside Elysha and me, officiating our wedding.

Along the right side of the photo, about halfway down, is Sharon, a fifth grade teacher at the time and now our school’s curriculum specialist. In three years, Sharon will be serving as one of Elysha’s bridesmaids, and 17 years after this photo was taken, in the summer of 2021, I will be officiating Sharon’s own wedding to her husband, Alex.

Twelve years after this photo was taken, I will serve as the minister at Jess’s wedding ceremony and also work as the DJ during her reception.

Elysha and I were already close friends when this photo was taken, but we were tumbling toward romance. We will officially begin dating in less than six months, on March 31, 2005. By June, we’ll be living together, and by December, we’ll be engaged.

When the photo was taken, we are both dating other people, but in just 15 months, we will be planning our wedding.

Happily, most of the people in the photo remain in my life today.

Sharon and I still work together and talk every day. We have supported each other in important and profound ways over the past two decades.

I played golf with Rob on Sunday. When this photo was taken, I was performing in musicals written and produced at a local playhouse by Rob and Plato. He is fond of sending me photos taken on his many hikes when he knows I’m still toiling away at work.

Soon after this photo was taken, Andy and I will be writing and producing a rock opera of our own, and we’ll go onto writing and producing three more musicals together. I taught all three of Andy’s children. Someday we’ll write that puppet romance musical that we’ve been talking about for years.

Plato is now enjoying life on the west coast, but we spent a week with his family just prior to the pandemic, and we will be celebrating our shared birthdays in Bermuda in February.

Elysha is still sleeping in our bed as I write these words. Children who we could never have imagined when this photo was taken are sleeping in rooms down the hall.

Little did I know how things would work out when this photo was taken so many years ago.