In a hotel in Indianapolis. I found these two books – The Bible and The Book of Mormon – sitting on the corner of the desk, one atop the other. It was odd, seeing them stacked like this, as if one is a sequel of the other.

Actually, if you’re Mormon, I guess that’s exactly how you think of them. 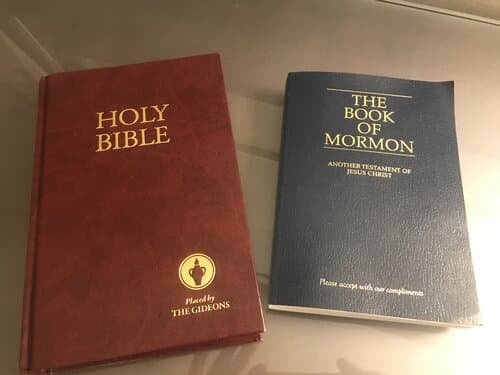 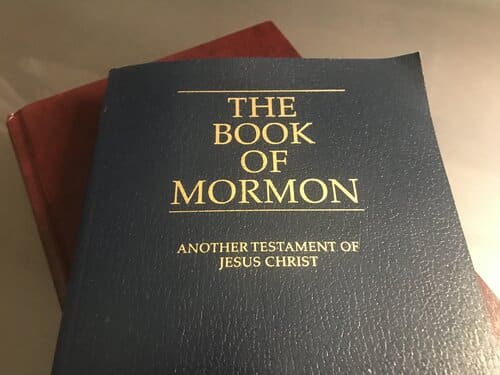 In terms of the books being supplied by hotels, I think we could probably do better. Admittedly, I’m a reluctant atheist who wishes he believed in something akin to God, so perhaps I would feel differently if I was lucky enough to possess faith. But I’ve read The Bible cover to cover three times, and though I’m a big fan of Jesus and enjoy the book of Psalms quite a lot, it’s hard to embrace a book that justifies bigotry against my LGBTQ friends and students.

Not to mention the violence and terror contained within its pages. Just turn to 2nd Kings 2:23-34, where God sends two bears to kill 42 children for making fun of Elisha’s baldness.

Try reading that alone, in a hotel room, in a strange city, late at night.

The Bible is filled with moments like this. Moments that aren’t part of the readings at Sunday service but are just as real as the testaments of Jesus.

How about in place of The Bible and The Book of Mormon, we consider something like The Art of Happiness by Dalai Lama and The Catcher in the Rye by J.D. Salinger? Maybe Zen and the Art of Motorcycle Maintenance by Robert Pirsig or Springsteen’s memoir Born to Run?

Books slightly and consistently more inspiring. And decidedly less terrifying and absent of the constant demands that we kill homosexuals, adulterers, fortunetellers, women who are not virgins on their wedding night,. children who curse their parents, and many, many more.

I sent this photo to my friend, Shep, while still in Indiana. He thought that The Book of Mormon might have been placed in the room without the knowledge of the hotel, so I had to check.

The woman behind the front desk said, “Yes, The Bible and The Book of Mormon are supplied to us, so we place both in the rooms as a courtesy for our guests.”

“Really?” I replied. “What if I were to supply you with copies of the Qur’an? Would you place them in the room as a courtesy for your guests?”

“I can’t comment on that,” the woman said, clearly unsettled. “Anything else?”

What I really wanted to propose was The Gospel of the Flying Spaghetti Monster, but I suspect that she (and most people) are not familiar with this particular religious tome. But I have a copy if you’d like to borrow it. It admittedly contains nothing as inspiring or enlightened as Jesus, but it also doesn’t demand that we kill people who work on Sundays, either (Exodus 31:12-15).