Nothing to see here. Just the Secretary of the Treasury in the midst of economic collapse engaging in a Twitter feud with Guns n’ Roses lead singer Axl Rose.

This shouldn’t be surprising because we don’t have professionals running our government. In a time when large corporations and wealthy Trump donors are receiving loans from a program designed by Congress to assist small businesses and nearly one-quarter of Americans have lost their jobs, we have an infantile moron in charge of the United States Treasury who thinks that his time is best spent firing off inane tweets at the lead singer of a metal band.

And embarrassing himself while doing so.

Did you hear about this?

Treasury Secretary Steve Mnuchin’s appeared on Fox Business earlier this week, talking about when Americans will be able to fly again. In terms of domestic travel, he said, “This is a great time for people to explore America. A lot of people haven’t seen many parts of America. I wish I could get back on the road soon.”

Given the fact that shelter-in-place orders and social distancing requirements are still in place, not to mention that unemployment is approaching historic levels and Americans are running out of money, perhaps this wasn’t the time for the Treasury Secretary to encourage Americans to begin traveling or wishing that he could be traveling soon, too.

Axl Rose thought so. In response to this bit of stupidity, Rose tweeted, ““It’s official! Whatever anyone may have previously thought of Steve Mnuchin he’s officially an asshole.”

Amidst our country’s economic collapse and the disastrous rollout of the PPP program, Mnuchin somehow found time to respond to Rose’s tweet with this:

“What have you done for the country lately?” followed by an emoji of the flag of Liberia.

He meant to post an American flag, but he posted the Liberian flag instead because he’s stupid.

Rose immediately responded to Mnuchin with this:

“My bad I didn’t get we’re hoping 2 emulate Liberia’s economic model but on the real unlike this admin I’m not responsible for 70k+ deaths n’ unlike u I don’t hold a fed gov position of responsibility 2 the American people n’ go on TV tellin them 2 travel the US during a pandemic.”

I wish Axl had punctuated his tweet better, but it’s a good response nonetheless. Unlike idiot Mnuchin, Axl Rose doesn’t occupy a high office in the federal government. He isn’t responsible for the Treasury or the financial wellbeing of the American people.

He is not the Treasury Secretary, Steve. He’s the lead singer in a band.

Mnuchin deleted his Liberian flag tweet and replaced it with an American flag, but the damage had already been done. The internet had a field day with him. Not only had the Treasury Secretary taken the time to respond to the tweet in the midst of this pandemic and economic collapse, but his response was stupid and featured the flag from a nation that his boss, Donald Trump, once referred to as a “shithole country.”

What a bunch of racist, elitist morons.

You couldn’t make up this level of incompetence if you tried.

Two things annoyed me about this exchange on a personal level.

So go to hell, Steve Mnuchin. Axl Rose has done a great deal for our country. He’s made music while you’ve supported a racist, incompetent, self-serving President and mismanaged programs designed to help the American people.

The question should be this: What have you done for our country lately, Steve Mnuchin? 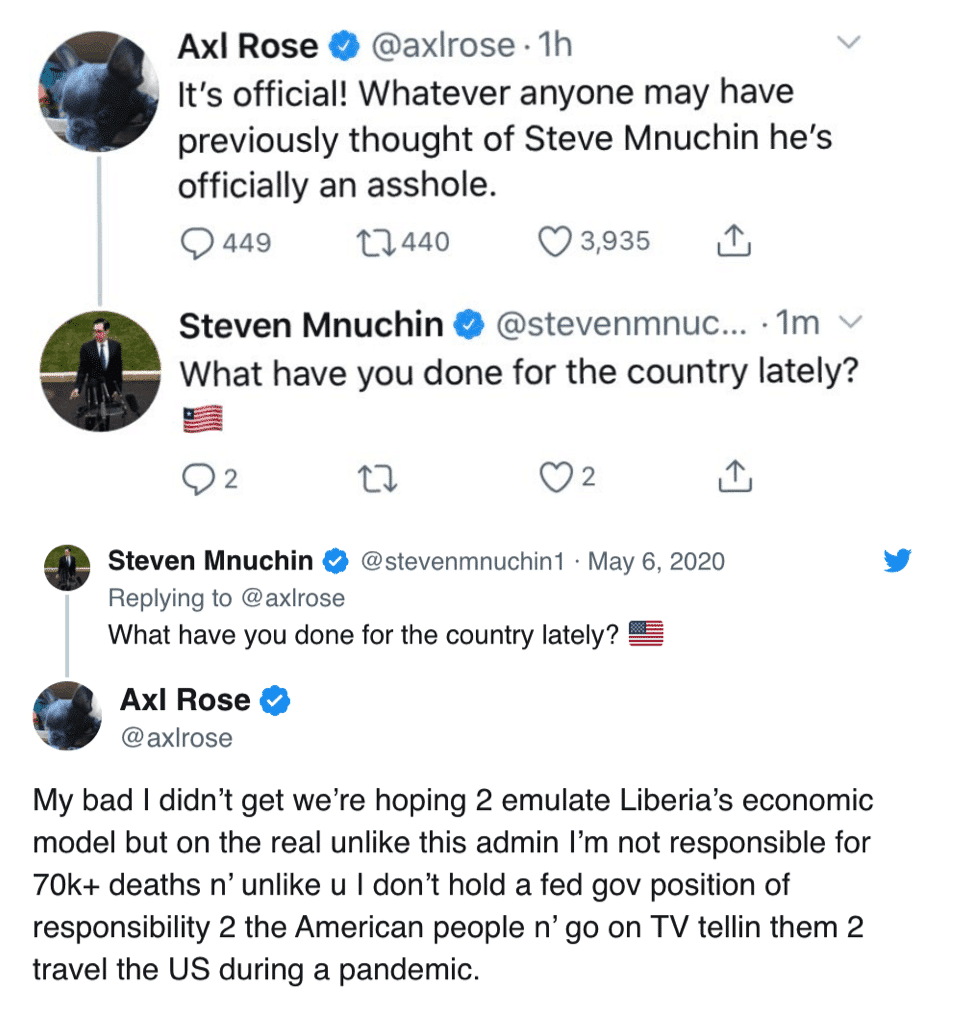