Stephen King has written about the importance of a supportive spouse to a writer, and I couldn’t agree more. While on our honeymoon two years ago, I spent hours by the pool working on SOMETHING MISSING while my wife, Elysha, basked in the Bermuda rays.

Yesterday our first child was born, a girl named Clara Susan. My wife and I arrived at the hospital around midnight and she contracted until about 8:00 AM before starting to push. Ultimately she would push for almost four hours before the doctors decided that a c-section was necessary.

Not an easy experience for my wife.

But during the eight hours of contractions, there is little to do but try to sleep and remain relaxed. With an epidural on board, Elysha felt no pain, so there was simply a lot of waiting and attempts to sleep. So I opened up the laptop and began writing. A couple of the nurses gave me an odd look when they saw that I was pecking away at the computer while my wife was being examined for dilation and effacement, but Elysha didn’t mind a bit. In fact, during one of these exams, she turned to me and asked, “What are you working on?”

I did, until it was time to push. Then I was required to hold a leg, whisper words of encouragement, and refrain from passing out.

It was quite a day. I ended up with a brand new daughter and also managed to get a few pages closer to finishing my book.

Stephen King was right. A supportive spouse makes all the difference. 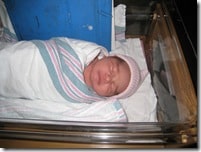 Posted in Autobiography, The Writing Process