Elysha and I attended yesterday’s Patriots game at Gillette Stadium. It was her first game in years, and she picked a good one.

With less than 2:30 on the clock and down 33-28, Tom Brady orchestrated an eight play, 75 yard touchdown drive that won the game for the Patriots. With less than 30 seconds left on the clock, he threw a touchdown pass to Brandon Cooks that caused the stadium to erupt in celebration.

It was exciting. Thrilling. Supremely satisfying.

Over the course of the last 17 years, Tom Brady has brought me enormous joy. Constant celebration. Countless memories.

I’ve also been fortunate enough to begin attending games regularly at the very beginning of his career. Brady has played in 239 regular season games and 34 playoff games over the course of his NFL career, and I have been inside the stadium to witness many of them.

Brady was drafted in the sixth round of the 2000 NFL draft. Pick #199. A compensatory pick as a result of losing four players to free agency: Todd Collins, Tom Tupa, Mark Wheeler, and Dave Wohlabaugh.

Four forgotten players whose exit from the franchise changed it forever.

This is the draft card, submitted by the Patriots organization, that gave them the rights to Tom Brady. It is my favorite piece of paper in the world. 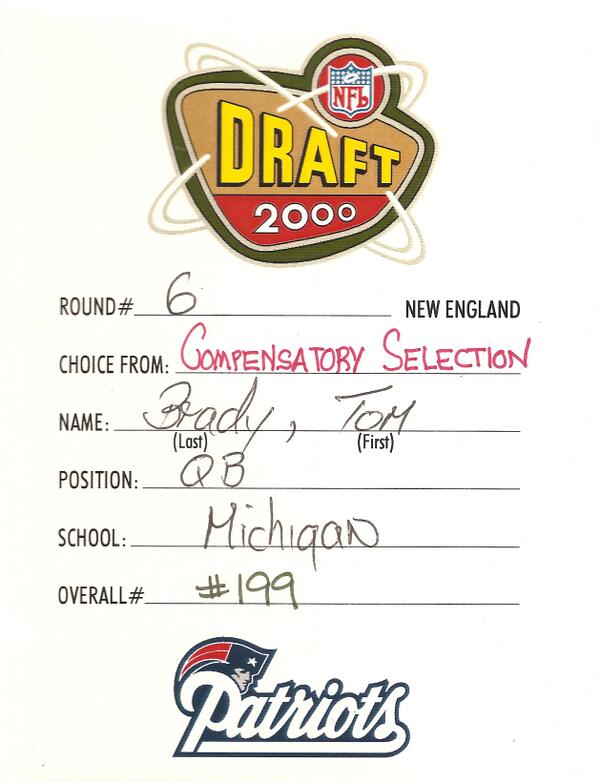