Look guys I have no reason to lie! The truth of the matter is we got tricked, duped, led astray, hoodwinked, bamboozled!

Well, you can, but it makes you a hypocrite and an idiot.

More importantly, is there anything more pathetic than a guy whining about being disrespected? 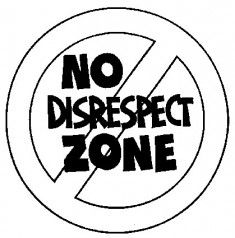 Oh… you felt disrespected?  Poor little linebacker.  Do you need a hug?

One of the worst ways to get respect is to ask for it.

If you have to ask for it, it ain’t real.

But even worse than asking for respect is whining when you are not getting any.

Respect yourself.  Respect those who have earned your respect. And stop worrying so much about other people think.