There are many reasons to be nervous onstage. One of the more popular reasons offered – and possibly the only reason I’ve ever heard someone offer – is that people are nervous about public speaking because they care.

This is true, of course, but it doesn’t make much sense when trying to understand nervousness onstage.

We care about many things we do in life, but not all of them make us nervous.

I care deeply about safely getting my kids to school every morning, but I’m not nervous about doing so.

It’s a decidedly incomplete explanation of nervousness while public speaking.

It’s also the least important reason and not helpful at all.

In fact, claiming that people get nervous onstage because “they care” discounts everyone who cares deeply about their performance but does not get nervous.

I’m almost never nervous onstage. I like to say that a unique combination of arrogance and stupidity combine to form a coat of armor that protects me from the pointed spear of nervousness, but in truth, I suspect it’s because of a few reasons:

I’ve been speaking to audiences all my life, first at Boy Scout camp, then later as a wedding DJ, minister, actor, college debater, and teacher. I took public speaking in college and campaigned for President of the Student Council. I had spent thousands of hours standing before audiences by the time I told my first story or delivered my first formal speech onstage.

My nervousness, if it ever existed, probably died a long time ago.

Quite the opposite; I can’t wait to get onstage. I’m excited about standing before people and talking.

Perspective also helps. After you’ve been on trial for a crime you didn’t commit, homeless, and had a gun pressed to your head and the trigger pulled, a roomful of Brooklyn hipsters or an auditorium of Silicon Valley executives aren’t quite so intimidating anymore.

Or, and this is quite possible, they’ve never actually been onstage before or haven’t performed onstage very often. The number of speaking and storytelling coaches and directors who have never done or rarely done the job themselves is both astounding and terrible. In these cases, these inexperienced coaches repeat something they’ve heard before because they can’t possibly know or understand what it feels like to perform onstage routinely.

But understanding the real reasons behind being nervous can help you mitigate some of those nervous feelings.

Knowing, they say, is half the battle.

In that spirit, here are the more common, relevant, and accurate reasons for being nervous onstage:

This is why you’re nervous. Not simply because you care but because public speaking is hard.

You should be nervous. It makes sense.

Now for some good news to help mitigate your fear:

You can also do the following things to help dispel some nervousness:

The most important thing to remember is this:

Nervousness is normal. You should expect to feel nervous before speaking to an audience of any size, but you should never allow it to prevent you from entering the arena of public speaking.

Public speaking is a skill that few possess. Storytelling is a superpower. If you’re willing to overcome your nerves by accepting them as an expected and manageable part of the job, you will find your value in your organization increase dramatically, and your ability to connect to others explode exponentially.

You’ll also quickly discover the joy of entertaining and informing an audience. You’ll feel the euphoria over being able to move an audience from laughter to tears and everything in between. You’ll experience the remarkable satisfaction of being known and understood by people who had never met you before.

Don’t allow nervousness to stand in your way. Accept it. Deal with it. Maybe even conquer it someday.

But never let it hold you back. 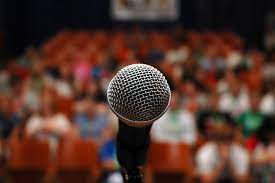