Elysha, the kids, and I watched the film “What About Bob?” last night.

Clara left halfway through, choosing to read a book rather than finishing the movie.

Charlie stuck it out, laughed uproariously a few times, and declared it “pretty good.”

I don’t blame them. The film is from 1991, so it could use a fresh coat of paint. It’s a little slow at times, and the logic breaks once or twice along the course of the movie, but I also think it’s brilliant. It does something that I’m not sure I’ve ever seen a movie do this well:

The film starts with the audience sympathizing with psychiatrist Dr. Leo Marvin, played by Richard Dreyfuss. Dr. Marvin is an imperfect man, to be sure, self-obsessed, self-promotional, and slightly cavalier, but also someone who is being tormented by a new patient, Bob Wiley, played by Bill Murray. Dr. Marvin agrees to take on Bob as a patient from a psychiatrist who is quitting the profession because of Bob and is clearly not honest with Dr. Marvin about Bob’s degree of need and obsession.

After an initial consult, Bob becomes attached to Dr. Marvin, eventually finding his way to Dr. Marvin’s vacation home in New Hampshire and endearing himself to his family.

Bob lies about committing suicide. Poses as a police officer to obtain the address to Dr. Marvin’s vacation home. Violates the doctor-patient relationship at almost every moment throughout the film. While Dr. Marvin’s family sees Bob as a harmless, sweet man, Dr. Marvin rightly sees him as a troubled patient who has hunted his doctor down to demand further treatment.

Then somewhere along the way, the audience’s allegiance shifts to Bob. He goes sailing with Dr. Marvin’s daughter. Teaches his son to dive and helps him overcome his existential crisis. Helps to save Dr. Marvin’s appearance on Good Morning America.

As an audience member, I still see Bob as utterly inappropriate and infuriating, but I also come to believe in Bob and less so in Dr. Marvin.

Eventually Dr. Marvin attempts to murder Bob, which shifts our allegiance completely to Bob, but even then, when the attempted murder results in the destruction of the Marvin family’s vacation home, I can still see how it’s been Bob’s incessant meddling and demands for treatment from a man on vacation that has led to this.

It’s a film wherein I find myself both supporting and opposing both characters simultaneously, and I’m hard-pressed to assert who the protagonist and antagonist are for most of the film.

Except maybe it’s just me.

When the movie ended, I told Elysha how impressed I am with the writer Tom Schulman’s ability to walk the line so carefully and leave me trapped in the middle, uncertain abut who I wanted to win: Dr. Marvin or Bob?

“You were never on Bob’s side?” I asked.

Other than the very end, when Dr. Marvin attempts to murder Bob, she said no. She was on Dr. Marvin’s side the entire time. She never liked Bob.

I couldn’t believe it.

I realize the movie is 30 years old, but it made $63 million, which would be about $121 million in today’s dollars, so it was no slouch at the box office, and it’s certainly a movie that remains in the zeitgeist, named as one of the 20 funniest films of the 1990’s.

Still, you may have never seen it, but if you have, I’m dying to know:

Or were you like my cold-blooded wife, with no empathy or love for Bob Wiley, a man who is admittedly troubled, manipulative, and infuriating, but is also charming, sweet, harmless, and endearing? 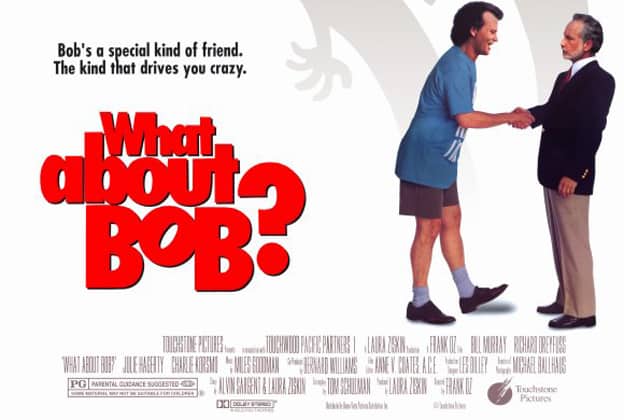