The apology was not required, In fact, I was surprised he took the time to apologize at all. He knows better.

And hearing my pages were excellent was lovely, but when I send him something to read or ask him to listen to a story, I’m seeking ways to make it better more than any praise for what I’ve already done. 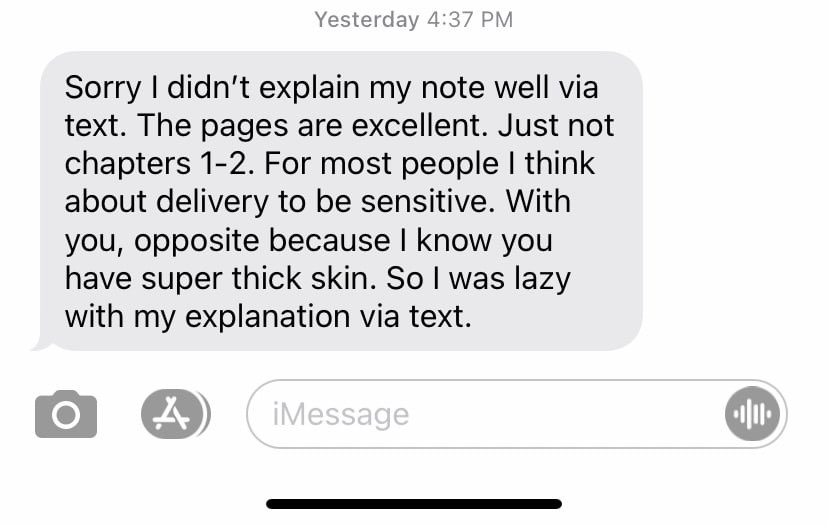 In fact, David and I first met because his wife – a high school friend of Elysha – dragged him to a rock opera that my friend, Andy, and I had written and produced years ago. David was pleasantly surprised to discover that the show wasn’t bad. He genuinely enjoyed it. At the end of the performance, we met for the first time on the edge of the stage as the audience filed out.

Less than a minute after shaking my hand, he was offering me three notes on the show that were all brilliant.

When I took his notes to our director, he agreed.

We’ve been friends ever since.

No, the reason I love this text message is because it’s a reminder that David knows me. He understands my desire for honest, constructive feedback, and he’s keenly aware of my ability to receive criticism absent the sensitivity that many rightly require.

Recently, someone accused me of being more fragile than I want people to think.

“You can’t possibly care about (his) opinion as little as you say,” she said. “You want people to think you don’t care, but I know you do.”

“Whatever,” I replied, not really caring about her opinion either.

But I wasn’t annoyed by this woman’s opinion because she doesn’t know me like my close friends do, and that’s why I enjoyed this text message so much.

It’s a beautiful thing to be known and understood by your friends.

David has given me some of the most important, succinct, critiques of my work over the years. His notes have transformed my musicals, solo shows, and novels significantly. He’s had an enormously positive influence on my creative career.

But the thing I treasure most is how well he knows me. Understands me.

I suspect that this is one of the reasons I stand on so many stages and tell so many stories about my life:

To be known. To be understood. For audiences to see me for who I am.

When I get a text message like this, I know I’ve achieved this goal.