I’ve written before about the unexpected surprises that can happen when you put things into the world.

In the past, readers of my blog and books and followers on social media have done some amazing things on my behalf.

My search for my hazily-remember first book ever borrowed from a library culminated in a librarian identifying the book and sending a copy to me.

My goal to convert a blog a I’d written over the course of the first five years of my children’s lives – letters to them every day – resulted in a friend and storyteller taking on this behemoth task herself out of the kindness of her heart, producing five enormous, beautiful tomes of writing and images that my children read constantly.

In the course of writing and speaking, I’ve been reconnected with my elementary school principal, my high school vice principal, and the teacher who taught me to tie my shoes in kindergarten.

I’ve heard from comedian Kevin Hart, a senior strategist from the Hillary Clinton Presidential campaign, and the girlfriend of one of the Blackstone snipers, a man who fired bullets into the homes of 11 random victims when I was a teenager, wounding four and resulting in the National Guard patrolling our streets for a period of time.

She saw the post recalling that time in my life and wrote to me, complaining about my disparaging remarks about her boyfriend, who had been paroled after and was turning his life around.

You simply never know what might come your way.

This week, I added three more people to this list.

On Monday, I posted a newly discovered photo of my mother’s  class from 1963 on my blog and social media. A couple hours later, Facebook friend Pamela Frohboese McDill had downloaded an AI app called Remini that enhances photos in order to crop out and enhance the image of my mother from the photo.

Suddenly I could see the 13 year-old version of my mother with much greater clarity. What a wonderful and unexpected gift.

Much earlier that morning, well before the sun appeared in the horizon, I was interviewed by an ordained priest in England for his podcast on leadership. During the interview, I learned that he had received my book Storyworthy from his bishop, who had given it to all of his vicars as an Easter gift.

It’s so strange and so wonderful to hear that my book and my teaching have infiltrated the Church of England.

Also, it turns out that Monday was National Tell a Story Day.

You’d think I would’ve known about this.

Over the course of the day, podcast listeners, blog subscribers, and Instagram and Facebook friends reached out to me, telling me their own unprompted stories, sending me photos of their stacks of Storyworthy in their corporate offices, and asking my why the hell I didn’t know that it was National Tell a Story Day.

Fair question, though they didn’t need to sound so annoyed about my failure to recognize the day.

I’ve said it before, and I’ll say it again:

Put things into the world. Words, art, music… whatever is your jam.

Publish your recipe for whiskey peppermint brownies. Share a photo of your Nancy Pelosi cross stitch. Post the video of your cat doing that cute or awful thing.

Put stuff into the world. You simply never know what or who might come back to you:

But I added it to my calendar for next year.

There really is no telling what might come from the simple act of sharing, and that is the beauty of the thing.

The internet has made the world a much smaller, more connected place. That has turned out to be terrible in many ways, but it can also be quite beautiful. 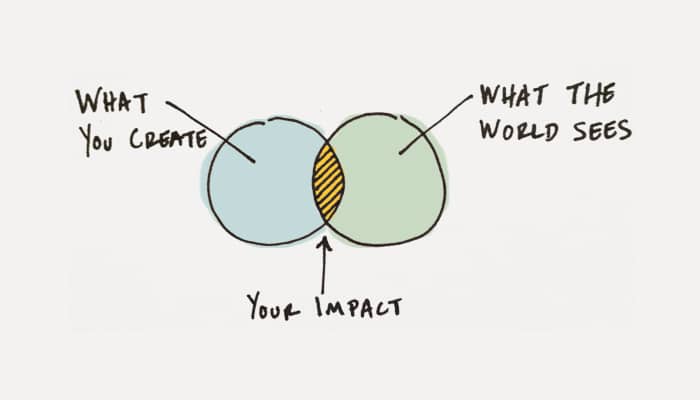