Leonard Woolf, husband of novelist Virginia Woolf, wrote in his autobiography of this moment prior to the onset of World War II:

One of the most horrible things at that time was to listen on the wireless to the speeches of Hitler — the savage and insane ravings of a vindictive underdog who suddenly saw himself to be all-powerful. We were in Rodmell during the late summer of 1939, and I used to listen to those ranting, raving speeches. One afternoon I was planting in the orchard under an apple-tree iris reticulata, those lovely violet flowers. … Suddenly I heard Virginia’s voice calling to me from the sitting room window: “Hitler is making a speech.” I shouted back, “I shan’t come. I’m planting iris and they will be flowering long after he is dead.” Last March, twenty-one years after Hitler committed suicide in the bunker, a few of those violet flowers still flowered under the apple-tree in the orchard.

Leonard Woolf understood the importance of preserving your soul, protecting your psyche from unnecessary stress, and finding ways to engage in acts of meaning and creation in the face of unspeakable stupidity, cruelty, and horror.

It reminded me of the night of the first Presidential debate. I was consulting with a client as the debate began. My plan was to finish with my client then join Elysha for the remainder of the debate and perhaps watch the beginning later on. But just before my consulting session ended, I received two text messages from friends indicating that the debate had already devolved into was a disaster and an embarrassment to our nation.

So I decided not to watch the debate. I decided that I would simply read about the debate and watch the highlights the next day rather than subjecting myself to Trump’s dishonestly and stupidity.

When I emerged from my office and entered the living room, I saw that Elysha had already made the same decision. The debate was on the TV but the sound was muted. She was knitting. “I couldn’t watch it anymore,” she said. “But I can turn up the volume if you want to watch.”

I declined. Instead, I worked on a book while she knitted.

We planted our irises rather than listening to “the savage and insane ravings of a vindictive underdog who suddenly saw himself to be all-powerful.”

I took the same approach to the remaining debates:

Avoid the actual debate. Do something productive. Read about it the next day and watch the highlights.

I was so much happier because of it.

I have taken this approach throughout my life.

When I found myself trapped in meaningless meetings run by an an incompetent narcissist, I started writing amusing lists that ultimately became my novel, Twenty-one Truths About Love.

During those same meetings, I began studying and completing the application to become a notary. One year later, I raised my right hand and was sworn in as an official notary for the state of Connecticut.

While trapped in traffic or waiting in long lines at the grocery store or similar places, I work on stories that I will eventually tell onstage or recite memorized poetry. Sometimes I’ll memorize a new poem. Lately, I’ve been working on memorizing the list of United States Presidents in order.

Harder than I thought.

On election night 2016, as Elysha and I began our journey from The Bell House in Brooklyn to our home, we decided to turn off the news entirely and listen to music. It looked almost certain that a minority of our fellow Americans had elected an incompetent racist and self-described sex offender as President, but rather than listening to the news for updates, we ensconced ourselves in a bubble of our favorite songs and kept the horrific news at bay. I’ll never forget the joy and peace of those three hours spent together in the car.

While waiting more than three hours in a drive-thru COVID-19 testing facility last week, Charlie and I entertained ourselves by singing, throwing toys at each other, wrestling in the front seat, watching a video of a goose flying beside a car on a highway, and scrolling through his baby pictures. I also taught him the purpose of every button and switch on the dashboard (except the one I didn’t know), and, of course, we spent time on our devices. He built new Minecraft worlds on his tablet while I wrote a poem about sitting under a maple tree, trying to read while my students pestered me.

Surrounded by the reminder of a raging pandemic and awaiting a test to determine if the coronavirus was living inside his body, we kept ourselves occupied by laughter, hilarity, nostalgia, creation, and more. We made memories that will last a lifetime.

We planted our irises. They will surely bloom long after this pandemic has come to an end.

Preserve your soul, people. Protect that fragile psyche. Curate the news and information that you consume carefully. Avoid doom scrolling. Don’t allow the outside world to dictate your internal self.

You deserve far better than this world currently has to offer, so push back on it with beauty, laughter, heart, and meaning.

Plant some irises. Plant a field of them if you can. 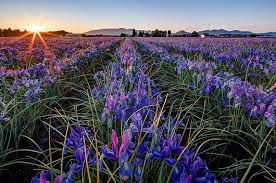