Competitive storytelling is a strange thing.

Take a stage. Share your truth. Ask a team of judges (or in the virtual world, an audience poll) to determine a winner.

I know it sounds a little silly, but I also love it. While some might oppose assigning a numerical value to a person’s story, it’s inevitable that on the way home from a storytelling show, audience members will discuss and debate their favorite stories of the night with each other.

Judging is simply that private process made public.

And while it’s certainly subjective and utterly unscientific, it’s also a fairly accurate way to judge a storyteller’s skill. The best storytellers simply win more often. This doesn’t mean that the judges always get it right, but it’s exceptionally rare when I’m competing in a storytelling competition and one of the two or three best stories of the night doesn’t win.

The reason is this:

Human beings have been listening to stories all their lives. Even if they can’t deconstruct a story, identify the craft at play, analyze the decision-making, and hone in on specific performance techniques, they inherently know what is entertaining and what is not. They know when a storyteller is being vulnerable, authentic, relatable, and funny, and they absolutely know when a storyteller is failing to do these things.

It’s actually a lot like poker. The best poker players win far more often than the lesser skilled players, but any poker player on any given night can win if the correct decisions are made. Similarly, a world-class storyteller can get his ass kicked by a first time performer with a great story and a willingness to be vulnerable, but over time, the storytellers who understand, study, execute the craft best will inevitably win more often.

Competition has been important for me because even though I’ve never won anything tangible beyond a trophy and free tickets as a result of winning a story slam and championship, the recognition of excellence that comes with winning has opened hundreds of doors for me.

I would not be performing around the world today and consulting regularly with Fortune 500 companies, universities, advertising agencies, law firms, and more had there not been a way to signal my skill and expertise to others.

Performing well and winning a lot has served as that signal.

Last month, I competed in my first Moth GrandSLAM championships of 2021. It was also my first virtual GrandSLAM competition, which is definitely not as fun as performing onstage in New York or Boston for a live audience, but it was still an honor.

I had performed in 27 GrandSLAM championships prior to last month’s virtual GrandSLAM. As I was preparing for this most recent one, I found myself thinking back on my very first GrandSLAM, way back in October of 2011 in the Highline Ballroom in Manhattan.

On that night, I didn’t know anyone who took the stage. Dan Kennedy, author and the host of The Moth’s podcast, was emceeing the show. I didn’t know Dan personally at the time, but I knew his voice, I had read two of his books, and I had met him briefly at my first StorySLAM.

He didn’t know me from a hole in the wall, but I knew him well and considered him an absolute celebrity.

Years later, Dan and I would share many stages together. He would write the forward to Storyworthy. He would become a friend. But on that night in October of 2011, we had never even shared a conversation.

I didn’t know any of the storytellers who took the stage that night, either. The winner and only woman competing, Erin Barker, would eventually become my friend. She would go on to perform multiple times in Speak Up shows, and I would perform in several of her Story Collider shows. We have helped each other with our own stories. Shared frustrations with aspects of the storytelling world. Just last week, I served as a judge in The Story Collider’s championship show, the Super Collider.

But on that night ten years ago, I didn’t know a soul. Erin was simply a brilliant storyteller who had kicked my ass.

But as I took the virtual stage for my Moth GrandSLAM last month, I saw my fellow storytellers and competitors for the first time, and I smiled. Even though they were spread throughout the country, I knew most of them. I had performed onstage with two of them on previous occasions, and two others had been students in my storytelling workshops. Over the course of the evening, two of them thanked me for Storyworthy, telling me that the book had helped their storytelling tremendously.

Another thanked me and Elysha for our storytelling podcast.

I’ve been defeated by stories that I spent hours helping to craft and hone.

I’m leveling up my competition.

When I first started writing Storyworthy, my friend, Kathy, asked if I was worried about giving away my secrets. “Aren’t you worried that you won’t win as many slams anymore?”

That hadn’t occurred to me. Part of it is my confidence in my abilities. Even with all my secrets, I still think I can win on any given night.

Confidence is a powerful thing.

Part of it is also that storytelling is constantly evolving. I’ve written one (and possibly two) more books on storytelling since Storyworthy, and the discoveries I make related to storytelling are continuous and seemingly endless. In fact, it’s rare for a week to go by when I don’t find something new to share with folks about the craft of storytelling. Elysha once said I talk about storytelling as if it’s some enormous mountain of knowledge and wisdom, and I’m simply donning my miner’s hat and constantly chipping away.

I also genuinely want the world to be a more entertaining place. Teaching people to tell better stories helps to make that happen, even if it costs me a couple wins.

You want your fellow competitors to do really well. You just want to do slightly better. In any other competition, blowing away the opponent is fine by me. But in storytelling, I want everyone to do their best. I just want my best to be better than their best.

Thankfully, leveling up the competition hasn’t seemed to hurt me much. In fact, when I crunch the numbers (because I keep data on everything), it turns out that my win rate has been slightly higher since the book has published.

Nothing to worry about, Kathy.

I didn’t win the Moth GrandSLAM last month. Part of the reason may have been that I was forced to go first. In the 28 GrandSLAMs in which I have competed, no storyteller has ever won from first position.

A much bigger part it might’ve also been that the winner, Otis Gray, told a fantastic story. A championship-caliber story. I’ve competed against Otis before and knew he would be hard to beat. He’s an exceptionally talented storyteller.

One of my longtime storytelling friends saw me competing in the GrandSLAM and asked why I’m still doing it. “People pay you to tell stories now. Why do these open mic slams for free?”

Though I’m not a fan of the virtual stage, I love the atmosphere of a Moth StorySLAM. I adore the communities in New York and Boston where I routinely compete, and I’m proud to call many of the storytellers and audience members my friends.

I also like the competition. The striving to be the best. The recognition of excellence.

But I also adore the nostalgia. When I take the stage in New York or Boston, I find myself consumed by the memories of past performances. Those early days when everything felt so new and mysterious. Those moments when storytellers who I admired introduced themselves to me for the first time with a smile and a compliment. The stories that I will never forget. The storytellers who have come and gone for reasons I sometimes know and sometimes don’t. Old friends who once sat beside me, elbowing me when a storyteller was doing especially well or especially poorly.

I feel it all when I stand on a stage and compete.

That’s why I do it. More than anything else, competing connects me with my past. It keeps those early days alive in my heart.

If you’ve been doing something for a long time as I have, it’s a good idea to stop every now and then and look back. Acknowledge how far you’ve come. Honor the journey. Remember the past.

In my newest, not-yet-published storytelling book, I argue that we are the culmination of the stories we tell about ourselves to ourselves. Looking back and remembering the journey, seeing the faces of those old friends, remembering those key moments, help to define our lives and our journey.

Ten years ago, I stood on a stage amidst a bunch of strangers, competing in my first storytelling championship.

Take a moment and acknowledge your journey. You deserve it. 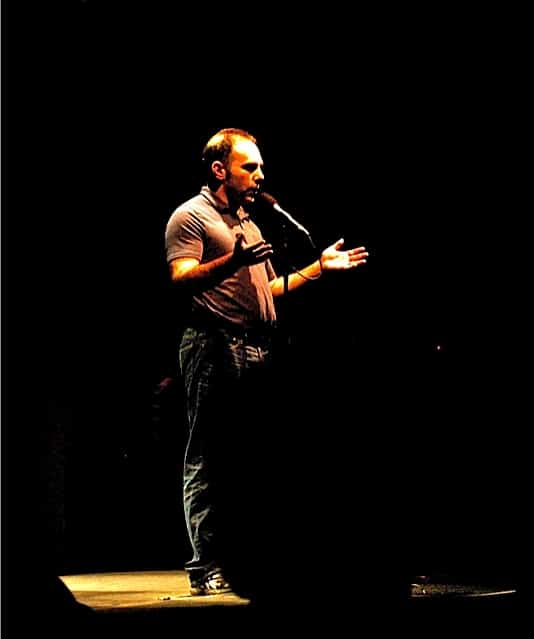