As you may know, I maintain an “I told you so” calendar. It’s a Google Calendar dedicated to the idea that people love to make makes claims about the future or tell you that your predictions of the future are ridiculous because there is almost no accountability for these statements when the future finally arrives.

If you make a ridiculous assertion about the future or tell me that my prediction is wrong, I’m holding you to it. I’m making you accountable for your words.

If, for example, you tell me that Tom Brady won’t be playing football after the age of 42, and that I’m “an idiot to even think that would be possible,” I’ll be calling you on August 3, 2020 to tell you that Tom Brady just turned 43 and is currently practicing for the upcoming season.

I made that call back in August. It was a lot of fun.

In the past, I’ve had items on my “I told you so” calendar related to sporting events, parenting, politics, my workplace, and more esoteric matters. I don’t win all of these “I told you so” moments, but I’ve probably won well over 75% of them.

And when I lose, I also call to admit defeat.

I have one of those coming up next month. I’m not happy about it.

I currently have 11 items on my “I told you so” calendar, including two items that will not become relevant for another decade.

I play the long game.

But four items will be leaving the list soon. In the past six months, four people have told me that Donald Trump would win the Presidential election, and in each case, I told them he would not. One of these people called me naive. Another said that I was living in a bubble. A third said that he’s surrounded by Trump supporters every day in his line of work, so “there’s no way Trump is losing.”

I’ll be calling these four people this weekend now that all 50 states have been decided and Biden is the clear winner to say, “I told you so.”

In fairness, none of the people who I will be calling wanted Trump to win. None of them supported a self-described sex offender and racist who lied to the American people about the dangers of the coronavirus, locked small children in cages, and stole from his own charity.

I suspect in this case, none of them will be disappointed that they were wrong. This particular “I told you so” will not bother any of them very much. In fact, I’m tempted to just ignore those four items and move on. 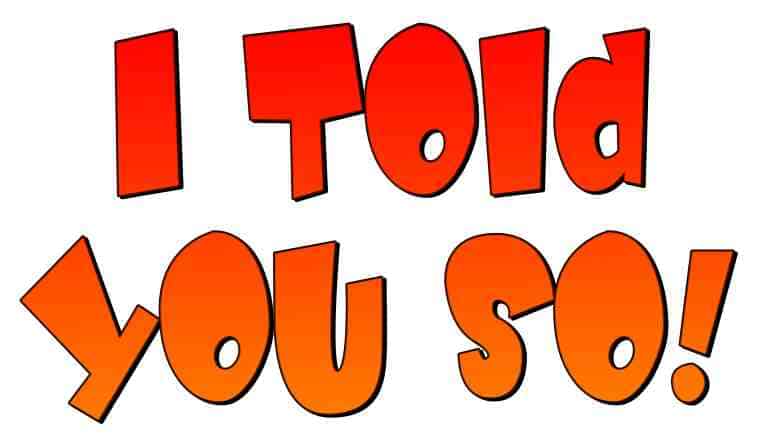