On the cusp of this new NFL season, as I prepare to return to Gillette Stadium for the first time since January of 2020, I still find myself conflicted.

The last play I witnessed in the stadium before the pandemic was Tom Brady’s pick six to former Patriot Logan Ryan in a playoff loss to the Tennessee Titans.

As I made my way down the steps to the concourse of the stadium, I was certain that it wouldn’t be the last time I’d ever see Tom Brady in the Patriots uniform.

It’s ridiculous, I know, but almost two years later, I’m still not handling Tom Brady’s departure from New England well. And it’s not like I haven’t watched other beloved athletes leave my favorite teams for other cities before. I understand that sports is a business. I believe that players should be free to sign contracts to play wherever they want. I want these players to be happy.

But for some reason, Brady is different. I’m still angry with him for leaving. I still can’t believe that he left. And when Rob Gronkowski came out of retirement to join him in Tampa Bay, that was the straw that broke the camel’s back.

I know there will be a day when I embrace Tom Brady again for all the unforgettable moments and Super Bowl championships that he gave New England fans during his 20 year tenure with the team.

Today is still not that day.

When Brady left, it was time for me to purchase a new jersey. I had bought a Tom Brady jersey back in 2001 when he took over the team for an injured Drew Bledsoe and never looked back. Over the years, that Brady jersey faded badly. My friends laughed at how ancient it looked. I was implored to purchase a new one.

But I didn’t care.

One jersey for one guy. As long as he was playing, I would wear his jersey to every game.

When Brady left for godforsaken Tampa Bay, I immediately purchased a Jarrett Stidham jersey. I pretended that my heart wasn’t broken, and I pretended that I was ready to move on. Stidham was the heir apparent to Brady, so he was my guy.

My friends laughed at me for my impetuousness, but I ignored them, and I ignored my heart. I needed to retire the Brady jersey, so I needed something to replace it.

I needed to stuff my feelings of heartache and betrayal with something. So I chose Jarrett Stidham.

Then Cam Newton came to town and became the starting quarterback, pushing Stidham back to second string status. Then pandemic hit, keeping us from returning to Gillette Stadium in the fall, so no jersey was really needed. The Stidham jersey hung in my closet, never worn.

The Patriots are now entering a new season with our new heir apparent, Mac Jones. Our latest first round draft pick. Stidham remains on the team, injured at the moment and probably third string at best. There is hope in New England as our new quarterback takes the field today,

Perhaps this is the beginning of something new. Something great.

I’m still between jerseys right now. I considered purchasing a Mac Jones jersey, but I decided to wait and make sure it was the right decision. I suspect Mac Jones will be around for a long time, but before I don another Patriots quarterback uniform, I want to be sure that I’m ready to move on for real this time.

I worked on a book instead. Watched The Simpsons with Charlie. Pretended it wasn’t happening.

But I watched the first game of the NFL season on Thursday night, which featured Brady’s Buccaneers versus the Dallas Cowboys.

I was rooting for the Cowboys.

But being able to watch Brady play for another team represents progress, I think. Maybe I’m on the cusp of finally healing this bitter wound.

So today, I head to Gillette Stadium wearing the jersey of former Patriots cornerback Chris Canty. I helped out my friend, Tom, with a problem recently, and as a way of saying thanks, he gave me the uniform of what might be the Patriots worst first round draft pick of all time. Drafted in 1997, Canty started just 10 games, recorded one interception, and was gone from New England by 1998 and playing in the Arena League by 2000.

A complete bust by all measures.

It feels like just the right uniform to wear until I find the right one. 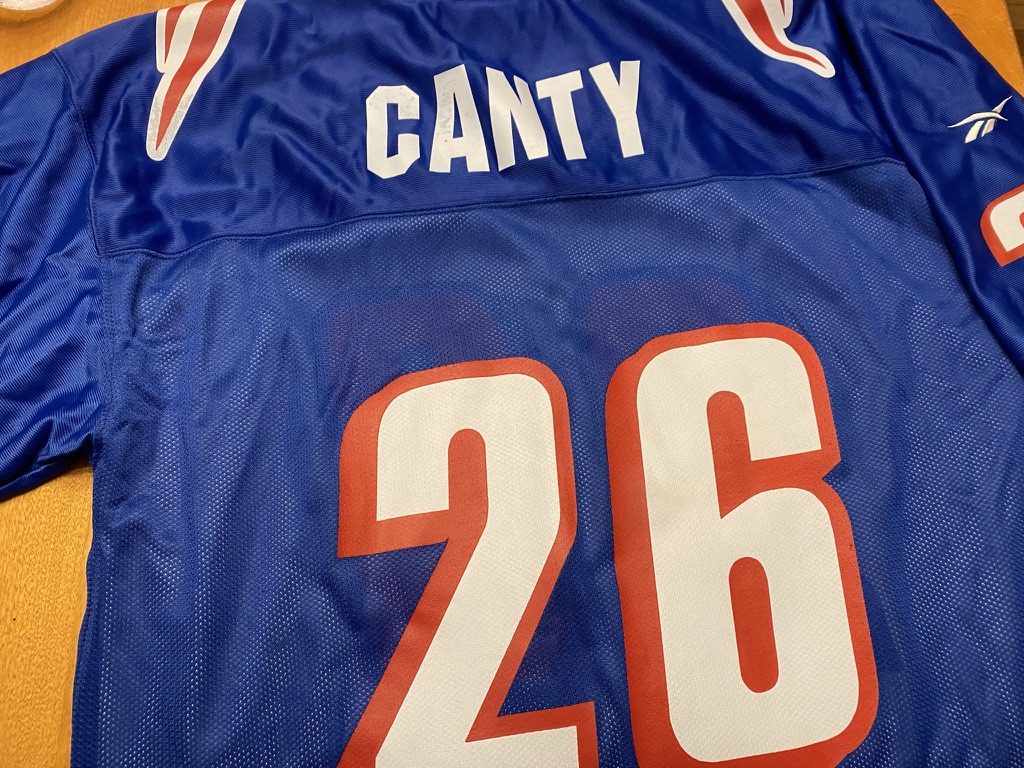