A few days before the midterm elections, Trump told reporters that he listened to one of President Obama’s campaign speeches for Florida Democrats.

“I was in the plane,” he said. “I had nothing else to do. He had a very small crowd. They don’t tell you that.”

Did you catch that? The leader of the free world had “nothing better to do.”

Trump had nothing to read? Nothing to plan? Not a single thing to learn? No member of Congress or governor or mayor or foreign leader to call? No supporter to thank? No meeting with a Cabinet member? No update on the California wildfires or North Korean weapons testing or the Syrian civil war or Brexit negotiations?

Not a single briefing from anyone in his administration?

Trump had “nothing better to do” so he watched Obama’s speech.

Had Trump said that he watched Obama’s speech to analyze his opponent’s strategy for winning the upcoming election, that would’ve been perfectly acceptable. A normal thing for a politician to do on the eve of the midterms.

But no. Trump didn’t watch the speech in order to scrutinize or strategize. He watched Obama’s speech because he had “nothing better to do.”

In at least the past 25 years, there has never been a single moment of my life when I had “nothing better to do.”

Honestly, the last time I can remember having “nothing better to do” was when I was 22 years-old and homeless, waiting out the long nights in the cold and the dark in the backseat of my Toyota Tercel.

I have always had something better to do. I am constantly waiting to get to my next thing. My plate is always overflowing. There is never a single second of my day when something hasn’t needed to be repaired, revised, refined, adjusted, examined, altered, advanced, or completed.

And I’m just me. Just an ordinary person with family and friends and work.

I’m not the President of the United States.

When Trump was campaigning for President, he constantly criticized President Obama’s work ethic. Complained about the President’s love of golf. Promised that he wouldn’t have any time for such things. Assured his voters that he’d be working all the time.

“I love golf,” Trump said. “But if I were in the White House, I don’t think I’d ever see Turnberry again. I don’t ever think I’d see anything — I just wanna stay in the White House and work my ass off, make great deals, right? Who’s gonna leave? I won’t have time to go and play golf. Being President is too important. “

Since becoming President, Trump has spent, on average, one out of every 4.5 days at one of his golf clubs. More than twice as many rounds of golf than Obama played over the same period.

162 days in total so far (out of 666 days as President), often refusing to allow cameras to film him as he plays. Often refusing to answer questions about playing. Often denying playing even after reporters spotted him on the greens.

In addition, Trump does not arrive to the office until 11:30 AM on most days and leaves before 5:00 PM, spending his mornings in the residence, watching cable news and calling members of the media.

He has yet to visit any of our troops overseas.

Skipped a World War I commemoration because of the rain.

This is a President who promised to work relentlessly for his voters yet finds himself with “nothing better to do.” 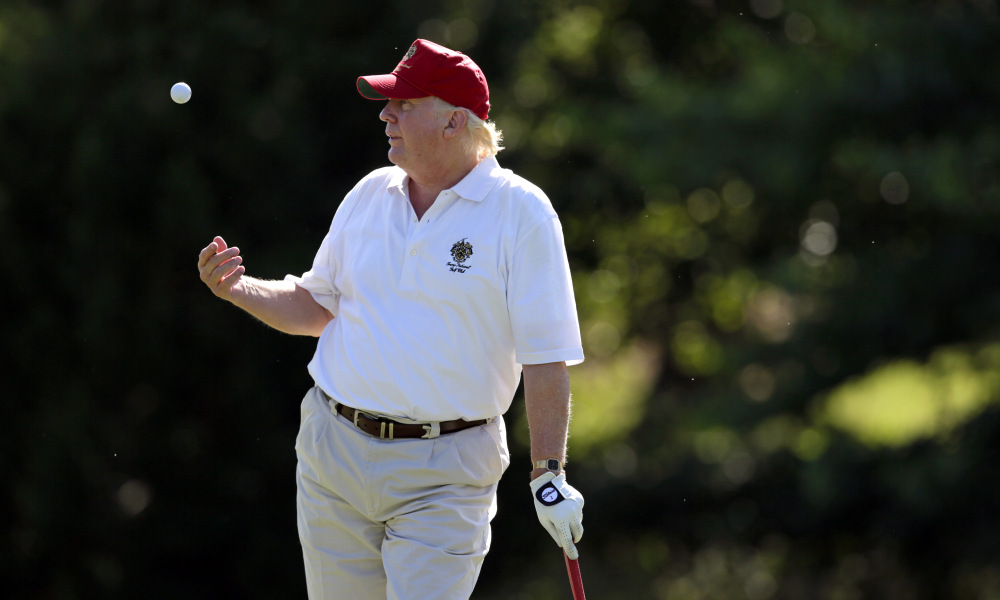