It’s rare that a document can bring joy to my heart and enrage me all at the same time.

King Jordan, the student who wrote this journal response, clearly has strong and justifiable feelings about Columbus Day and the reality of the explorer’s accomplishments. While his journal response might not be the most measured and thoughtful reflection of his learning that day, he is being both honest and passionate. A teacher should be thrilled with a journal response like this.

I would be. I loved this journal response. I admired it.

King is also a kid. While he was admittedly not as respectful in his response as I might like, he should be afforded some latitude when it comes to expressing his feelings in writing. He was angry. He felt powerless. And he’s a kid, damn it. Give him a break. He’s writing. Finding his voice. Experimenting with the craft. Help him write a more respectful and perhaps effective response, but celebrate this attempt. Cheer him on. Encourage this level of passion and honesty always.

Instead, the teacher makes a bunch of terrible choices. Rather than being open to criticism and the possibility of divergent thinking, he reacts emotionally and defensively. He takes his student’s criticism personally.

Instead of offering the constructive criticism that this student deserves, he responds in a single sentence, and his feedback is both irrelevant and thin-skinned. He also puts this meaningless and atrocious feedback in writing, thus making it both public and permanent. He doesn’t encourage further conversation or reflection. He simply tells his student that he doesn’t like what he wrote and that it makes him sad.

He also randomly and incorrectly capitalizes the J in journal in his response, which annoys me to no end.

It’s a selfish, stupid response that does a disservice to the teaching profession and a greater disservice to a student who is passionate about his education.

King’s response to his teacher’s feedback is brilliant:

“OK.” A single word that offers nothing by way of emotion or agreement. 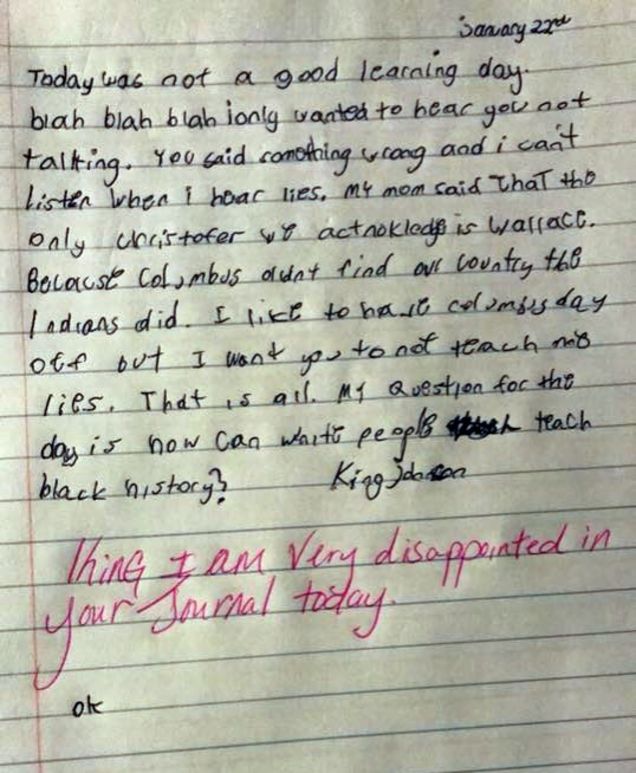