The latest parenting craze is pulling your child’s lose tooth with a drone. There are hundreds of videos demonstrating this new dental practice on YouTube, including this one.

My initial thought was that this is a ridiculous and stupid idea, but then I saw the number of views of the video (almost half a million) and it occurred to me that this video is generating more advertising income for the boy than all of the tooth fairy money he would see in a lifetime.

There are also videos of kids removing their own loose teeth via bow and arrow, which kind of impressed the hell out of me.

It’s also a much better system than the one practiced by my grandmother. She would sit in front of us, tie a string to our loose teeth, look us square in the eye, and yank.

No doorknob. Just me, my grandmother, and a piece of string separating us.

Scared the hell out of me.

My brother recalls a day when my grandmother pulled three of my teeth this way in rapid succession. I have obviously blocked the memory of this day and probably have suffered psychologically as a result.

But I guess it could’ve been worse. 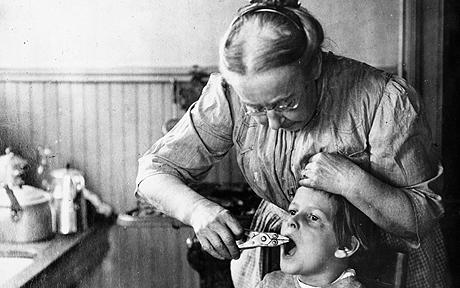