If you’re a regular reader of this blog, you probably know that I am a reluctant atheist. I would like to believe in God (perhaps a kinder and gentler God than the Old Testament version) and have faith in an afterlife, but up to this point, I have not found the capacity to do so.

As a result, I live in constant fear of the void. I envy people of faith for the peace they must feel about their ultimate demise.

But despite my ongoing, persistent existential crisis, here’s one good thing about being an atheist:

I don’t give a damn about what you wear, regardless of the circumstances.

Attending a religious service of almost any kind requires a person to dress in clothing that is almost always more expensive and elaborate than what one usually wears on any other day.

Suits and ties. Dresses and other female regalia.

Of course, this wardrobe requirement means that parishioners, worshipers, and other indoctrinates are required to spend money on these clothing items in order to appear presentable.

I have a couple thoughts about this:

First, does God really care about the quality or style of clothing that we wear? This is the same omnipotent being who supposedly brought Adam and Eve into the world in the buff. Yet parishioners are expected to wear their Sunday best when attending services?

Yes, they are. I see the ladies entering the church near my home every Sunday. Large hats. Elaborate dresses. Heels. Handbags. And they are escorted by men in fine suits and towing children in fancy clothes that they will most assuredly grow out of within a year.

Do we really think that God give a damn about what his people are wearing?

He doesn’t. I may not have the capacity to believe that God exists, but he doesn’t. Trust me. The clothes that you wear are the least of his concerns. 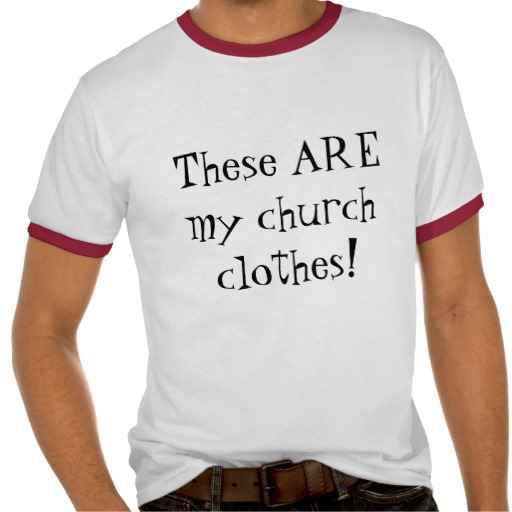 Second, wouldn’t the Lord prefer you arrive to church or synagogue in an old pair of jeans and a tee-shirt and use the money that would’ve been spent on more formal attire to help someone in need?

I may not believe in the Big Guy, but I’ve read the Bible cover-to-cover three times, and everything that I have gleaned from my study inclines me to believe that God (and especially Jesus) would prefer that you ditch the expensive threads and put the money spent on them to better use.

I am absolutely certain of this.

When we dress up for our religious services and don our “Sunday best”, we may try to rationalize this as a way of showing respect for God and our fellow worshipers, but this, I think, is nonsense. You would earn far more respect from the Almighty if you took the $300 that you spent on that suit or dress and used it to help the homeless. Or the hungry. Or the sick.

Wardrobe requirements at religious services are man-made artifices, serving only to satisfy the human ego and/or further indoctrinate worshipers by lending an air of importance and formality to what should be a personal relationship between a human being and his or her creator.

And this is why atheists don’t give a damn about what you wear. Atheists are not interested in any of this ceremony, ritual, or means of indoctrination.

Attending the baptism of a friend’s daughter? Where whatever the hell you want. Who are we to judge?

Invited to attend your niece’s first communion? No need to change those jeans. As long as your sex organs are covered by something (denim, gabardine, or even fig-leaf), we are fine with your choice of attire!

Unencumbered by ritual and routine, free from indoctrination and the judging eyes of peers, I propose that the atheist is better able to see through the artifice of custom, ceremony, and law to the essence of what human being’s relationship with God is supposed to be.

The relationship as it’s described in the Bible.

The relationship I would want with God. A relationship based solely on my thoughts and deeds and not upon my physical appearance.

Atheists (or at least this atheist) may live in fear of the void and suffer from an unending series of existential crises, but at least we can wear jeans and sneakers to the most formal, religious services and still feel good about ourselves.

This does not mean that atheists will always wear whatever they desire to their friend or family’s religious ceremonies even though they think they should. Sometimes ethics and principles are trumped by the sheer power and will of one’s familial expectations, as annoying as that may be.