My daughter noticed my books for the first time today. They are stacked on the cluttered bookshelf near where I write, and as I was giving her a hug, she looked over my shoulder and asked, “What’s that?”

I told her that they were the books that I had written. She knows that I write books because she often tells my wife that “Daddy write books on computer,” but I don’t think she knew that I had actually published anything until today.

How could she? She’s only two-years old. She doesn’t know what publishing means. 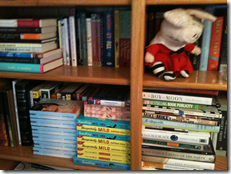 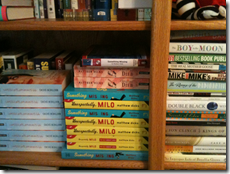 She stared at the pile for a moment before reaching out and touching the spine of Unexpectedly, Milo. Then she traced the word “Milo” with her index finger and said, “M-I-L-O.”

Just the fact that she could identify all four letters without any prompting was amazing.

But to watch my daughter trace the letters on the spine of a book that I had written, and then to listen to her call out the letters while realizing for the first time that her father had actually written the book, was one of those singular moments in life that I will never forget.