On Monday night I had the pleasure of speaking as a part of the third annual Connecticut Author’s Trail at the Jonathan Trumbull Library in Lebanon, CT. An audience of about 50 intrepid Author Trail followers were kind enough to fill the room to listen to me chat about writing and books and life in general. It was an engaging group of people, filled with lots of interesting questions, and they sent me home with a tub of cookies that I managed to avoid eating by passing out at drive-thru restaurants and Dunkin Donuts over the last two days.

I made a bunch of fast food employees happy while avoiding most of the unwanted calories.

My friends, Tony and Erin, were kind enough to show up for the talk.  It is thanks to Tony that I have Patriots season tickets, and he actually delivered them to me that night, making it the best gift I have ever received for a  speaking engagement. I told the audience that Tony ranks fourth in my life in terms of most important people. The order is my wife, my daughter, my agent and then him. And while that may be slightly tongue-in-cheek, it isn’t far from the truth.

I entered the library wearing a baseball hat and shorts and carrying a backpack, and as a result, no fewer than four people commented on how young I looked. “You’re a little young to be an author,” one woman said skeptically, and two others suggested I get a new publicity photo taken, and fast. It just goes to show:

I was asked one of the toughest questions of my authorial career when a librarian who I had met at a previous retreat explained that she is often asked, “Who is this Matthew Dicks?”

Faced with having to explain that I am an author, a teacher, and a DJ (among other things), she said that she’s had a difficult time describing me. So she passed the question onto me. “Who is Matthew Dicks?” she asked, leaving me to fumble with the question before offering little by way of answer.

But at every author appearance, I always recommend half a dozen other books, and on Monday I recommended SIX WORD MEMOIRS, and so she suggested I provide my own six word memoir in hopes that it might help.

A piece about the evening was written up in the Lebanon Reminder by staff writer Melanie Savage, and I liked it quite a bit. She captured the highlights of the event well. The piece also included this photo as well, which I liked because it captures the season tickets sitting on the table beside me.

I love the Patriots. 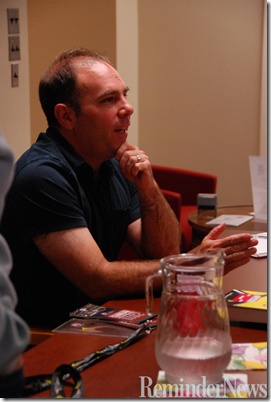