Here’s a new strategy that I’ve been using to great effect:

Yesterday I did not want to go for a bike ride. This has happened before. Rain, frigid temperatures, and relentless wind have caused me to want to stay home several times over the past two months.

Yesterday the weather was perfect for the bike, but my quads were sore from the previous day’s ride, so I was considering taking a day off.

Since I stopped going to the gym in mid-March, I haven’t missed a single day of bike riding. Some rides were admittedly only a few miles long, but I’ve found a way, despite the weather, to go out and exercise everyday for more than two months.

“I deserve a day off,” I rationalized with myself. My muscles needed a break.

Then I said something to myself. My new strategy. One I’ve been using a lot lately.

I said, “You don’t need to ride today. Take a break if you’d like. But just remember that if you take the day off, you suck. Don’t worry. It’s fine. Lots of people would take the day off, too. They suck, and now you will suck, too.”

Not wanting to suck, I climbed atop my bike and went from one of my longest rides so far.

I was so happy I did.

I’ve used this same strategy many times over the past two months.

“Don’t worry about those last 500 words. You can just write extra tomorrow. But if you quit now, which is totally reasonable given all that is happening in the world today, you suck.”

“You don’t need to do these last 25 pushups. You’ve done enough. But lots of people quit on themselves, and they suck. So now you’ll be just like them.”

“You can eat this delicious bowl of ice cream. You worked hard today. You earned it. But it’s almost midnight. Not the time to be eating ice cream. If you do, you really suck.”

And it’s worked. Every time.

And there’s an added bonus. Not only does my “You suck” strategy force me to do the right thing, but it turns out that not sucking feels amazing. Knowing that most people would’ve eaten the ice cream or skipped the pushups or avoided riding their bike when the temperatures dipped below freezing makes the sheer act of not sucking feel extraordinary.

I’m doing the right thing. Lots of people are not. Some past version of myself might’ve not.

I oddly feel better than had I just done the right thing without any warning.

My “You suck” strategy is simply a means of peeking into the future and acknowledging the results of your actions (or inactions). Rather than feeling guilty about eating that bowl of ice cream or regretting your decision to skip exercising, the “You suck” strategy reminds you that those feelings of regret and disappointment are real and oftentimes quite painful.

Most important, the regret and disappointment will probably continue to exist a lot longer than it takes to eat that ice cream or complete that final set of pushups.

Maybe this is a strategy that only works for me. Perhaps my desire to avoid being average motivates me in a way that it wouldn’t for most. My deeply held belief that I can rise above mediocrity with a positive attitude, a relentless desire to achieve, and a tireless work ethic makes the possibility of sucking fundamentally unacceptable to me.

At least whenever not sucking is within my power.

But maybe give it a try. Not sucking is a pretty great thing. 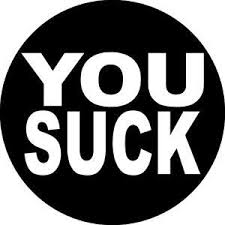