In moments when you feel like our country is moving in a frightening direction and you question the motives of your fellow Americans, please keep in mind that the rational, reasonable, decent people tend not to be the loudest, most aggressive people in our world, so it’s easy to feel like we’re going over a cliff at times.

A Kaiser Family Foundation poll found 64% of Americans supported the recent protests against police violence. Support for the protests is seen across racial lines, with 84% of blacks, 64% of Hispanics and 61% of whites in support.
A Quinnipiac University poll found 67% of registered voters supported the protests as a response to “the death of George Floyd at the hands of police.”
Trump may now be referring to protesters in the most vile terms, including this weekend, when he compared protesters to the Nazis of World War II (as opposed to the Nazis of Charlottesville, who were “very fine people”), but a majority of Americans support their efforts.
Also, Elysha, Clara, Charlie, and I marched in a Black Lives Matter march. Does that make us Nazis? Or agitators? Or anarchists? Or any of the other names that Trump has been using?
I kind of like agitator. My mother referred to me as an instigator, but agitator ain’t bad.

This is a shocking number given the hateful rhetoric we hear about immigrants. It’s also refreshing and reassuring. Trump may not like immigrants, but most Americans recognize their value to our country.

Back in April, as America watched a handful of cowardly, pathetic, white men occupy the statehouse in Michigan with their assault rifles in protest of the quarantine, I reminded myself that those pathetic protesters are also in the minority.

Also, 92% of Americans support a background check requirement for all gun purchases.

Reasonable, rationale gun controlled is supported by a large majority of the American people.

If their religious leaders stopped preaching bigotry, some of these Americans might eventually reconsider their positions as well.

Trump recently appealed to the Supreme Court in yet another effort to overturn Obamacare, but it’s important to note that 55% of Americans support the Affordable Care Act, while only 37% do not.

Here’s my favorite bit of information from last week:

After failing to secure funding for his border wall even though Republicans controlled both houses of Congress for two years, Trump was forced to take money previously allocated to build schools on military bases to build his wall.

He quite literally took money from the children of American soldiers to build a wall that 68% of Americans oppose.

Mexico, by the way, has not paid a dime for his wall, even though Trump promised this again and again during his campaign. Instead, they laughed at the request.

Even with this newfound funding, Trump has constructed almost no new wall. He claims to have built more than 200 miles of wall, which in itself would be a tiny percentage of the total amount required, but much of that wall is simply replacing and repairing previous wall and fencing already in existence.

But this week, Mexico announced that given America’s failed response to COVID-19 and the soaring infection rates in Republican-led border states like Texas and Arizona, Mexico might close their border to the United States, as Europe has already done.

Trump’s absolute abdication of this pandemic and his refusal to do anything to save American lives has resulted in a healthcare crisis so out of control that his border wall has now been rendered moot.

Mexico might pay for the wall after all. Anything to keep Americans out.

Has @BubbaWallace apologized to all of those great NASCAR drivers & officials who came to his aid, stood by his side, & were willing to sacrifice everything for him, only to find out that the whole thing was just another HOAX? That & Flag decision has caused lowest ratings EVER!”

Bubba Wallace, for example, was not the person who found a noose hanging in the garage where his car was parked prior to a race. In fact, he never saw the noose at all. He had nothing to do with reporting the noose to NASCAR. And though the FBI determined that the noose had been hanging for months in the garage, there was still a noose being used as a garage door pull in a NASCAR garage.

Not a great look, even if it wasn’t specifically targeting Watson.

He’s a fan of racist losers.

Shortly after hitting send, Trump was inundated by the tweets of other NASCAR drivers, defending Bubba Wallace and insisting that no apology was required. NASCAR also pointed out that the ratings from Sunday’s race were up by 8% at a record high.

A small victory, but one that most people will not see or hear about.

This is just a handful of stories and positive polling numbers, but in these times of social unrest, raging pandemic, and Presidential hate speech, it’s easy to sometimes think that our country is hurtling in the wrong direction. While racist ignoramuses like Trump might be trying to push this country over the edge, they are repeatedly shown to be in the minority in our country. They may be loud and aggressive and even threatening at times, and they may enter statehouses with assault rifles in pathetic attempts at intimidation, but the majority of Americans support racial justice, social reform, immigration, limits on gun ownership, same sex marriage, universal healthcare, and more.

Martin Luther King was right. The arc of the moral universe is long, but it bends toward justice. It simply doesn’t bend fast enough because of the efforts of people like Donald Trump who attempt to stymie it in every way.

But there is a reason that the last Republican to become President while also winning the popular vote did so 32 years ago.

A majority of Americans support an agenda of social and economic reform. America is filled with good, decent citizens. It’s just sometimes easy to forget this when the guy in the White House is not. 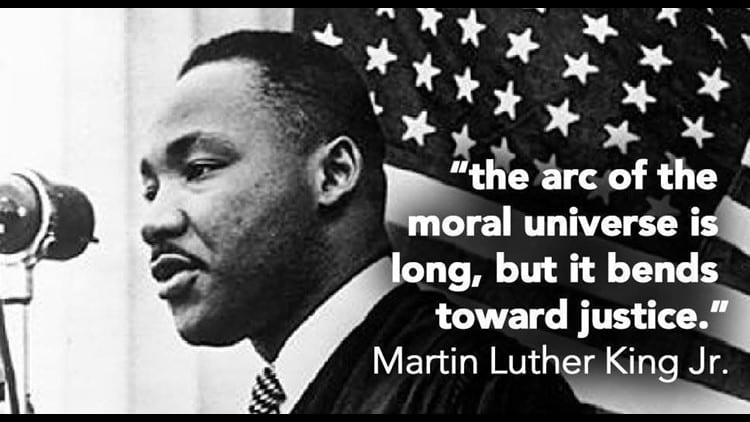