Today is Elysha and my engagement anniversary!

Fifteen years ago today, I proposed marriage to the woman I love, and she accepted.

Yesterday we were back in New York City, standing in Rockefeller Center beneath the famous Christmas tree, which had been a part of our engagement fifteen years ago. This time we were holding the hands of our two children, which was lovely but also a little odd.

Fifteen years ago, I asked a woman to marry me, and now two new human beings exist as a result.

Happily, the day of our engagement remains clear in my memory, partly because it was such a perfect day, and partly because when we arrived home that night, I immediately wrote down everything I could remember from that day so I would never forget.

Here is what I wrote:

On December 28, 2004, I asked my wife to marry me. My goal was to give her a proposal that she would never forget. Here is the story:

Elysha’s favorite room in the world is the main room in Grand Central Station (actually named Grand Central Terminal), so I chose that as the location for the proposal.

I also wanted the proposal to be a complete surprise, so I chose December 28, right in between Christmas and New Years and less than two weeks before her birthday. I figured that if Elysha was suspecting a proposal, she might expect it to happen on Christmas, New Year’s Eve, or her birthday, so deliberately avoiding those three days would increase the chance of surprise.

Elysha had also told me months prior that no one had ever thrown her a surprise party, and she hinted that she would like me to throw one for her someday. I had told her at the time that I would plan a surprise party for her next birthday and would still manage to surprise her despite the forewarning.

She foolishly doubted me.

My plan was simple:

It was a busy time for me.

It worked, by the way. We arrived at the home of our friends, Justine and Charles, on her birthday for what Elysha thought would be a simple dinner for four. She managed to walk halfway into a room filled with people before even noticing them. When we shouted, “Surprise!” she was most definitely surprised.

But before all of that, I needed to execute the perfect engagement.

First, I needed a reason to be in New York on the day of the proposal, so I enlisted the support of Elysha’s sister, Emily, who helped me tremendously. Two weeks before the proposal, Emily called and asked us to come into the city that day. She also arranged for a luncheon at Ruby Foos following the engagement.

My plan was to propose to Elysha on the top steps of Grand Central, overlooking the famous clock and the throng of holiday shoppers and tourists that were sure to be jamming the place that day. Embedded within that mass of travelers and holiday shoppers would be our friends and family, remaining hidden amongst the crowd in order to watch the proposal and then surprise Elysha immediately thereafter.

This required a lot of coordination. Emily and our friend, Cindy, were instrumental in this task. First I had to get word to everyone who I wanted to invite, making sure that they maintained absolute secrecy from anyone not invited until after the proposal. We had to arrange for these people (22 in all) to be on a train from New Haven prior to the train that Elysha and I would be traveling on, and we also had to ensure that they would be out of the New Haven terminal before Elysha and I arrived.

We also had people living in New York City who were coming in for the proposal, as well as one family who were on their way home from Washington, DC who would be stopping at Grand Central to join us. Coordinating the timing and placement of these people in the terminal was quite a challenge.

In order to purchase the engagement ring, I assembled a committee of four of Elysha’s friends. While she was in an after-school meeting at work, the committee convened in the classroom of one of these friends. While I kept a watchful eye on the hallway, these women went online to choose the perfect ring based upon the specifications I had gleaned from Elysha over the previous year and their own knowledge of her.

Once they were all in agreement, they purchased the ring and had a shipped to the home of another colleague for safe keeping.

All was in place when Elysha and I left the house on the morning of December 28, 2004. Plans were finalized, reservations for lunch were set, and the diamond was stuffed deep into my coat pocket.

Of course, nothing ever goes perfectly.

About 15 minutes from the station, Cindy called. Texting was still in its infancy in 2004, so phones were still primarily being used as phones. I pretended that she was my mother, so while I pretended to speak to Mom, Cindy informed me that my friend, Jeff, was running late (almost certainly because of his wife) and might still be in the New Haven terminal when Elysha and I arrived. I purposely took a wrong turn off the exit to add time to our trip and was immediately berated by Elysha for doing so.

Upon arriving in the New Haven terminal, I discovered that MetroNorth had unexpectedly added another train to their schedule: an express that would put us into New York just minutes behind the train that our friends were already riding. Elysha saw the earlier train on the schedule and suggested that we take it.

This was not good.

I knew that Cindy and Emily would need time to position everyone in the terminal, and a few minutes might not be enough. Thinking fast, I explained to Elysha that Emily was expecting us on the later train, and since we had time to kill, we could get some breakfast and relax for once in our lives, since we are usually sprinting to make every train we had ever taken. She agreed, and the potential disaster was averted.

Trouble raised its ugly head again about halfway to New York, when a train in front of us broke down, forcing our train back to Bridgeport in order to switch tracks. In all our trip was extended by 45 minutes, which was fine for me but began driving Elysha batty. The last thing I wanted prior to my proposal was a frustrated future fiancée staring me in the face. Thankfully a New York magazine crossword kept her busy enough to remain sane or else things might have been ugly. As she attempted to decipher the clues to the crossword, I went to the bathroom in order to call Cindy and warn her of the delay.

The last bit of trouble occurred upon arriving at the station. Because we had been switched to an alternate track, our train arrived somewhere in the bowels of Grand Central, on a track that Elysha and I had never seen before. Our friends and family had been positioned with the expectation that we would be arriving at a specific track number, and now I had no idea where we might emerge into the station. And because we were deep underground when we arrived, I had no cell phone service with which to warn Cindy.

All she knew was that Elysha was wearing an orange coat.

Thankfully that turned out to be enough.

As we emerged into the station, I grabbed Elysha’s hand and pulled her toward the stairs, aware that our friends could be anywhere at this point. I told her that I wanted to show her something. She rolled her eyes and followed. Someone in our group of friends spotted the orange coat climbing the stairs and everyone was watching as we reached the precipice. At the top of the stairs, amongst a throng of people, I stopped Elysha and turned her toward me.

The dialogue that took place was as follows:

Me: I chose this place because I know it’s your favorite room in the world.

Me: And I wanted a place that would always be here, so that someday we could show our kids, so…could you hold my book?

I had a book in my hand and wasn’t smooth enough to drop it to the floor. Elysha took the book and I removed the ring box from my pocket. Just then a police officer stepped between us.

A second later she saw the ring box and smiled.

Me: (Dropping to one knee)

Me: (On one knee) Elysha Green, I love you with all my heart and want to spend the rest of my life with you. (Opening the ring box) Will you marry me?

Elysha: (Starting crying and reaching out to hug me, never answering the question)

Friends: (Screaming in the distance, by our friends, who were immediately surrounded by National Guard soldiers)

Me: That’s all of our friends screaming honey…

The country was on threat level ultra-bad red that day, so the military was on hight alert. When 22 people erupted into cheers, the soldiers sprung into action, immediately surrounding the source of the disturbance. After assuring the National Guard that they weren’t preparing to commit an act of terrorism, our friends began racing up the stairs, with the principal of our school, Plato Karafelis, who would officiate our wedding two years later, in the lead, shouting and pumping his fist.

Elysha: Is that Plato?

Then a moment later…

Elysha: Oh my God. Where did you all come from?

The rest of the day was perfect. After the proposal, we all enjoyed lunch at Ruby Foos and then made our way down to Rockefeller Center to check out the tree and have our photo taken beneath it. Snow was lightly falling, the streets were abuzz with holiday shoppers, and things could not have been more beautiful.

Elysha, however, has yet to answer my question. 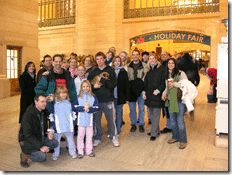 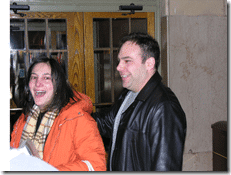 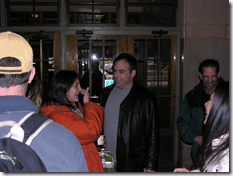 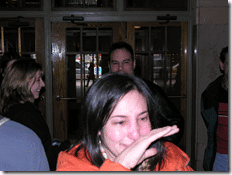 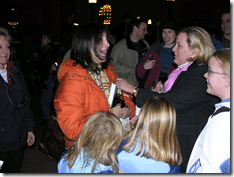 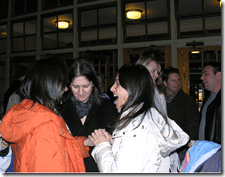 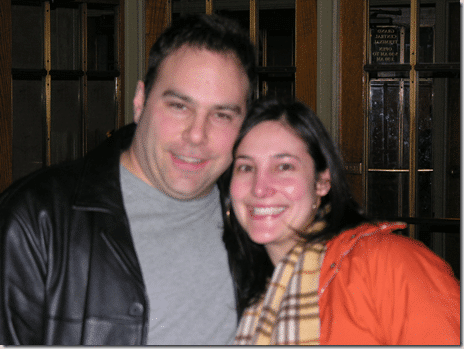