On a recent podcast, musician Aimee Mann said, “Being stuck in one place and bored out of your mind is the key to creativity.”
I couldn’t agree more. 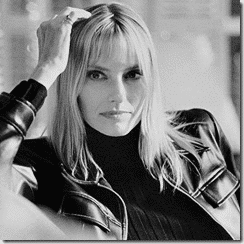 My writing career only began because I was bored out of my mind as well.

It was February of 2005. My wife and I were spending a week in Boca Raton, Florida with her then 87 year-old grandmother. Much of our trip consisted of breakfast and lunch at the club and dinner at a restaurant somewhere in town.

Halfway through the trip, Nana left us for the evening. She had a date with a man named Joe and an opera class at the local college, which left us home alone and without a car. After days without Internet access or cable television service and nothing left to read, I found myself in a desperate search for something to keep me busy.

The previous November, my then-fiancée and I were having dinner with our close friends, Charles and Justine. During the course of the meal, Justine mentioned that she had lost an earring earlier that day and was hoping to find it when they returned home. I asked Justine how she knew that the earring had been misplaced. “Perhaps some clever thief came to your house and stole just one earring, so that you wouldn’t suspect theft.”

The idea of a thief who only steals items that go unnoticed lodged itself in my mind, and when I arrived home later that night, I jotted down the idea on my ever-growing list of possible story ideas.

The idea was still stuck in my mind while pacing around Nana’s home three months later, but I had no story. Just the idea for a character. Nevertheless, boredom defeated my belief that I had to outline any story that I was going to write, so with nothing but an idea for a character, I started writing.

I wasn’t sure if it would be a short story or something longer, but by the time the trip was done, the first three chapters of the novel were complete and I was well on my way.

When I began the book, I had no idea where the story might take me,. I simply began connecting sentences together and waited to see what might happen. This is a method of writing that no one had told me about during my time at college. Despite attaining a degree in English with a creative writing concentration, my professors had always taught me to outline before writing. Create character sketches. Research. Plan.

I’ve since learned to embrace the unknown and allow the story to come to me. Stephen King calls this “unearthing the fossil,” though I wouldn’t hear this expression until the book was nearly finished. I’ve also learned that about half of all fiction writers write this way.

Ten years go, this would have sounded like nonsense to me, but now I believe it with all my heart. There were many moments in the writing of Something Missing when I literally did not know what would happen next until I wrote it, and the same has held true for my subsequent novels.

In fact, as I writing the final chapters of Something Missing, I still didn’t know what my main character’s ultimate fate would be. I was writing the section of a chapter in which much of the plot would be resolved when my wife called.

“I can’t talk. I’m about to find out what happens to Martin.”

If you are reading this chapter someday, remember that I experienced it just like a reader would: One word at a time. 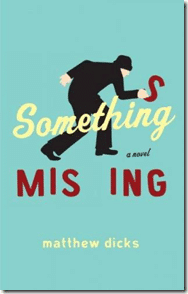 Though many authors know exactly where their stories will ultimately go, I do not, and I’ve learned to trust this instinct. I start with character. I find a person who interests me, and then, in a vomit-provoking, disgustingly spiritual, earthy-crunchy way, I assume that the plot is already written in the character’s fate.

Once I’ve found the character, his or her fate is sealed. I just have to unearth it.

But it’s true. I’d been trying to start a novel for more than five years before beginning Something Missing, but each time, I thought that I needed to plan the story from beginning to end before starting to write. While many writers work this way, I have found that I am better off beginning with a glimmer of an idea and discovering the rest along the way. I leave the story to fate, and things have seemed to work out so far.

I like to tell this story because I worry that too many writers sit around, waiting for their one great idea to emerge, when that idea might already exist, waiting to be unearthed.

So if you’re waiting for the next great novel idea to reveal itself to you, why not pick up a pen and starting writing while you wait?

As for my, I’m eternally grateful that even at the age of 87, Nana was still driving, dating and taking classes. Like Aimee Mann, I needed to be stuck in one place and bored out of my mind for my creative process to finally reveal itself to me. Nana unwittingly provided me with just that when she left me at home that night.

She’s 92 today and little has changed. On Sunday night she was sitting in the audience at The Moth’s GrandSLAM, chatting with hipsters from Brooklyn while waiting to hear me tell my story.

I have friends in their thirties who tell me that they can’t stay up that late. 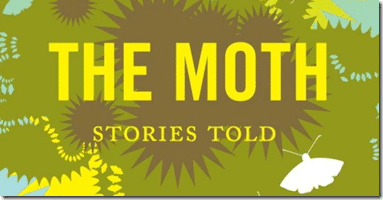 Posted in Recommended Reading/Viewing, SOMETHING MISSING Items, The Writing Process