I was anxious to read about the concept of the solo honeymoon – this alleged shift in nuptial vacation wherein newlyweds go on separate honeymoons, called unimoons or solomoons, rather than vacationing together following their wedding.

The New York Times published a piece on this new trend, which I tend to think is far less of a trend than the New York Times would have us believe. Good for clicks but not an actual shift in cultural norms.

Just a collection of selfish weirdos.

Still, I was excited to write a humorous, judgmental screed attacking this stupid idea and the people involved.

But then I ran into the photo topping the article and its caption, and I was forced to stop reading lest I throw up a little in my mouth.

I haven’t vomited since 1983, so it would’ve been quite the thing.

The photo alone is something to behold… but then I read the caption. A “three month break from each other in the middle of their yearlong honeymoon?”

I’m not sure which is worse? The need for three months apart from your brand new spouse or the performative privilege the yearlong honeymoon?

It’s one of those instances where the combination of two things magnifies and expands the awfulness of each individual thing.

Even if you’re willing, capable, and in need of such a thing as a year long honeymoon, why would you allow this fact to be published in the New York Times? Do you really require this level of attention? Are you really so desperately needy as to pronounce your 365 day honeymoon (and your need to escape your husband for more than 2,000 consecutive hours) in the newspaper of record?

Who does this kind of thing?

Yes, I am. I’m happily, gleefully, and righteously judging. But I’m also sure that these newlyweds are outstanding human beings who I would love and admire if I had the opportunity to know them, and if given half a chance, I’m sure that they would instantly befriend me.

Right? I’m sure we have loads in common and a shared set of values.

And our friendship might prove highly beneficial for Pawel and Carlos, because if any of my friends ever posed for a picture like this above a caption like this, I would immediately punch them in the faces. 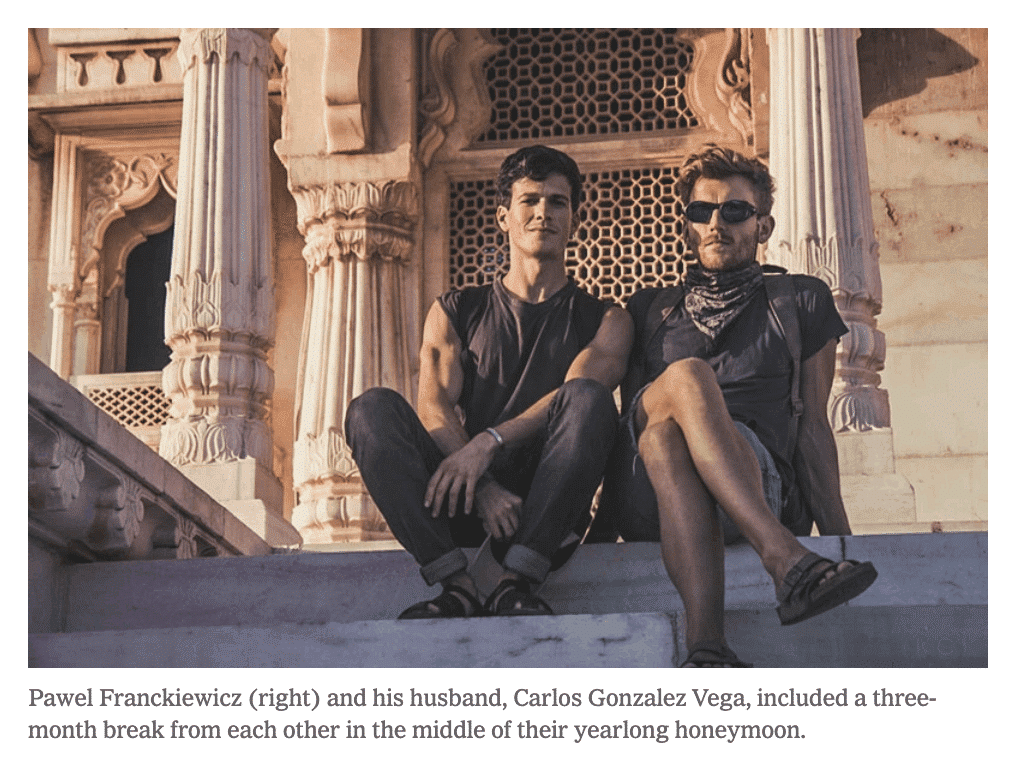