There is a short cross street in my neighborhood that connects two infrequently traveled longer streets.

A total of eight houses on the street in all.

For the last two years, the owners of one of those homes has been trying to sell a canoe. At times the canoe has been displayed in the bottom of the driveway. For a while, it was sitting in the middle of the lawn. Sometimes it’s at the top of the driveway.

At the moment the canoe is nowhere to be found, but a well-crafted sign indicating that a canoe is for sale is planted in the yard beside the driveway.

That canoe is never going to sell.

It’s been two years. What are these people thinking?

So many times I’ve wanted to knock on the canoe owner’s door, introduce them to CraigsList, and solve their problem.

It makes no sense. I don’t know these people. I don’t really care about the sale of their canoe. When the canoe is on display, it’s really quite lovely, so it’s hardly an eyesore.

I shouldn’t care so much about these people or their canoe, yet I have thought about that canoe a lot over the past two years.

Maybe you’re thinking, “Empathy! Matt, you have empathy for these canoe owners! You’re capable of caring for people you’ve never met! See? You have a soul after all!”

The truth is that I just hate inefficiency. I can’t stand to watch people struggle with a problem when a simple solution is available.

This happens to me all the damn time.

For example, I feel the same way when someone tells me that they struggle with sleep.

“Do you watch television in bed?” I ask. “Sleep later on the weekends? Eat food three hours before bed?”

When they say yes, as they almost always do, I tell them to stop it. Just removing those behaviors will help immensely. “Add some white noise when you sleep, exercise daily, and start meditating, and your problems may be solved.”

Then I look into their eyes and see that none of this is going to happen. They want to sleep well, but they don’t want to do the few simple things that might solve the problem that causes them to whine constantly about the problem.

Then I quietly lose my damn mind.

Why should I care? Why does this bother me?

It’s not empathy. It’s outrage. Outrage that simple solutions to their problem are available and are likely to work, but instead of embracing them, they reject them as unrealistic or too difficult.

I can see it now:

I knock on the door of the canoe people. I explain to them that CraigsList is a website where items like canoes are bought and sold every day. “In fact, I checked CraigsList before I came over and found several canoes on sale,” I’ll tell them. “Take a photo, post it on CraigList, and get this canoe sold.”

“Yeah,” the owner will say. “But that sounds like a lot of work.”

“You hand painted a sign!” I’ll say, trying to contain my rising emotions. “You’ve been dragging that canoe up and down the driveway for the past two years. In five minutes, you can increase your chances of selling that thing exponentially.”

“Oh,” the owner will say. “Okay. Thanks so much for stopping by.”

But then I’ll look into their eyes and know that I’ve already been dismissed. There will be no CraigsList listing. Just like the damn people who struggle to fall asleep at night but can’t imagine not watching Seinfeld reruns in bed before turning out the light, this problem will remain unsolved even though a simple solution is available to them.

It’s not empathy. It’s outrage. Knowing that canoe is still sitting there, waiting to be sold, makes me crazy.

It shouldn’t, but it does.

If only there were a solution as simple as CraigsList to cure me of this admittedly ridiculous problem. 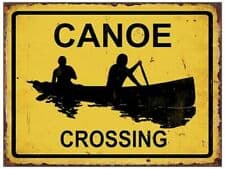