Slate’s Seth Stevenson argues in favor of not saying goodbye.

Ghosting—aka the Irish goodbye, the French exit, and any number of other vaguely ethnophobic terms—refers to leaving a social gathering without saying your farewells. One moment you’re at the bar, or the house party, or the Sunday morning wedding brunch. The next moment you’re gone. In the manner of a ghost. “Where’d he go?” your friends might wonder. But—and this is key—they probably won’t even notice that you’ve left.

I am an enormous fan of ghosting. My wife, however, would never allow it. My wife’s goodbye ritual takes at least 20 minutes and includes the scheduling of at least one future social engagement and engaging in at least one conversation on an entirely new topic before the farewell is complete.

For me, ghosting will never be a reality. Nor will it be for most people. Social conventions are incredibly difficult to change, and they are even more difficult to ignore for the vast majority of people.

It takes a special kind of arrogant rule breaker to ghost on a consistent basis. 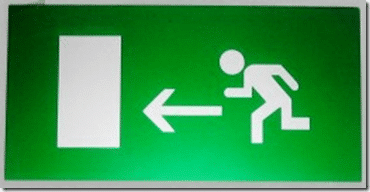 But there is one social engagement where ghosting shouldn’t even be an option. It should be standard practice:

As a wedding DJ with almost two decades of experience, I believe that ghosting at a wedding is not only acceptable but represents an act of kindness and generosity toward the bride and groom.

Every weekend, I watch as brides and grooms are pulled off the dance floor during one of their favorite songs by friends or family members who feel the need to exchange idle, meaningless, and soon-to-be-forgotten pleasantries before saying goodbye.

Don’t do it. Just leave.

If there are 150 people attending the wedding (an average number of guests for the weddings that I do), that means that the bride and groom will need to say goodbye to approximately 75 couples.

In the course of a five hour reception (also the average), that amounts to a goodbye every four minutes.

Since most guests don’t start leaving four minutes into the reception, what it really means is a constant stream of goodbyes during the last two hours of the reception, when the bride and groom are supposed to be dancing with friends and family and having the most fun.

“Don’t make the bride and groom spend the last few precious moments of their wedding saying goodbye to you.”

The announcement rarely had any impact on the selfish jackasses who thought that leaving 15 minutes early was more important than the happiness and enjoyment of a bride and groom on their wedding day, so I stopped making it.

But if there was ever a social event to ghost, it’s a wedding. The bride and groom will never remember who did and didn’t say goodbye to, nor will it matter to them.

I promise you: There has never been a bride or groom in the history of the universe who were concerned with saying goodbye to their guests in the midst of their reception.

If saying goodbye is important to you, stay until the end. Wait for the music to stop and the lights to come up. Then say goodbye.