Students at Seattle Pacific University handed rainbow pride flags to their college president and bigoted evildoer Pete Menjares during their commencement ceremony last week instead of shaking his hand in protest of a school policy that bars the hiring of LGBTQ people.

Just imagine this bigot’s reaction to reaching out to shake a graduate’s hand and instead being faced with a rainbow flag. Placing immoral cretins like Menjares into forums where their cruelty, stupidity, and wickedness is on public display is brilliant.

When my students took the stage to shake my hand during their promotion ceremony earlier this month, many of them handed me a small ball of cotton, because they know that I can’t stand to touch raw cotton. It’s texture is the tactile version of listening to someone scrape their nails on a chalkboard.

But knowing that we were ensconced in a formal ceremony with an audience of parents, teachers, and students, they also knew that I could do nothing but accept their hideous cotton balls and suffer without complaint.

Seattle Pacific University is a religious educational institution affiliated with the Free Methodist Church. Last month its Board of Trustees upheld a rule that prevents the school from employing staff members who engage in homosexual activity.

How do school officials even know who is having sex with who? Is this a question on their employment application?

Question: Please list your current sexual partners. Also, please indicate if your genitals and their genitals are matchy-matchy.

Also, this buffet style of morality is just so stupid.

The Bible forbids homosexuality in the Book of Leviticus.

In fact, in Numbers 15:35 Moses and his congregant stone a man to death for gathering sticks on the Sabbath.

Just imagine: The guy who received the ten commandments from God also bashed in the skull of a man with a rock because he had been found gathering sticks on a Sunday afternoon.

So it’s not God or the Bible or religious doctrine that causes these bigoted monsters like Menjares and his Board of Trustees to reject homosexuality or same sex marriage. It’s simply their creepy, perverse interest in the private sex lives of others. It’s their desire to control sexuality by determining what is right and what is wrong. And it’s their desperate need for everyone to behave in a way that makes them most comfortable.

I hope Seattle Pacific University students hand him pride flags all year long. I hope they plant pride flags on his front lawn every day. I hope Pete Menjares find himself awash in pride flags.

For my part, I’ve ordered a package of 50 small pride flags (just $14.99 on Amazon) that I will be mailing to Pete Menjares, one at a time, throughout the year.

I know it won’t change his bigoted mind, and I know it’s not a public act like the students at commencement, but it will make me happy and perhaps remind Menjares of how much his bigotry is despised by a majority of Americans. 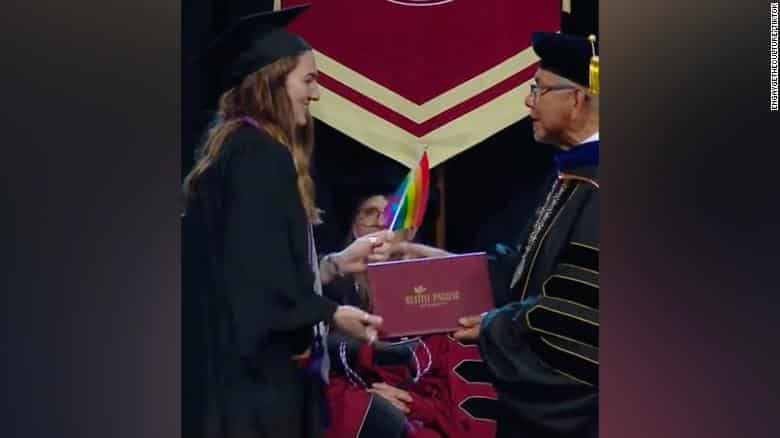