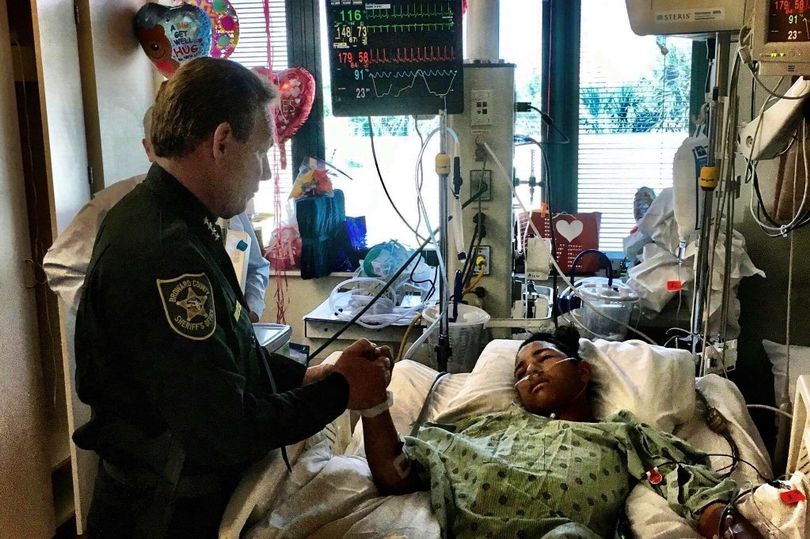 Anthony Borges has done more to protect students from gun violence than every single member of Congress plus the President combined. While lawmakers in Washington offer their thoughts and prayers and accept millions of dollars in campaign contributions from the NRA, Anthony Borges placed his body between a killer carrying an assault weapon and his fellow students.

While Congress refuses to even allow the CDC to study gun violence in America or move forward on their bipartisan agreement on banning bump stocks or close the gun show and terrorist loopholes, Anthony Borges turned his body into a human shield and saved lives.

Anthony Borges is a hero. Our legislators in Congress and the President are cowards. Tools. Money-grabbing instruments of the National Rifle Association.

Anthony Borges’s Republican Senator, Marco Rubio, accepted $3.3 million dollars from the NRA last year and took to the Senate floor shortly after the shooting to explain who the assault weapon that pumped five bullets into Anthony Borges’s body is not the problem.

There is a GoFundMe account set up on behalf of Borges to support his long and difficult road to recovery. Both of his legs were shot, left upper thigh bone was shattered, and one bullet went through his back. As of this writing, Americans have donated 76,000 on Borges’s behalf.

Perhaps Marco Rubio should consider donating some of that $3.3 million dollars in NRA blood money to Borges. At the very least he could help an American who has actually done something to curb gun violence in America while he and his colleagues hunker down and hope this all goes away once again.

I don’t think it will go away this time. At least I hope not. The classmates of Anthony Borges, some of whom are alive today because of Anthony, are angry, and they are taking their case to the cowards in Washington.

I will be standing with them. As a teacher in a public school who might one day be required to make the same sacrifice as Anthony Borges, the very least I should expect from lawmakers in Washington is debate. Deliberation. Research. Statistical studies. Expert testimony.

Legislation, goddamn it. Do something or go home.

Anything but the silence and the inaction that the NRA buys year after year with their millions of dollars in donations to Republican tools like Marco Rubio.