Supreme Court justice Samuel Alito warned on Friday that in the wake of the court’s ruling, Americans who publicly express views in opposition to same sex marriage will now risk recrimination. 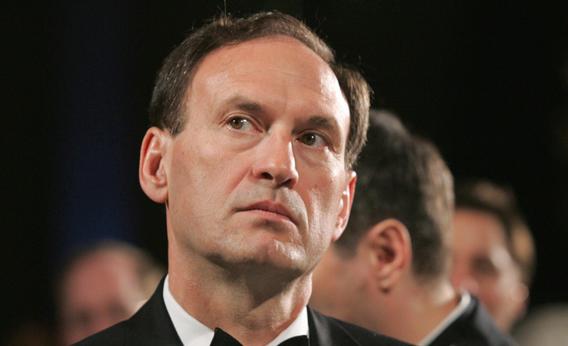 Does Justice Alito really think that we weren’t referring to people opposed to same sex marriage as bigots already? That’s like saying that Americans didn’t label slave owners as racists until slavery was abolished with the 13th Amendment.

Someone should inform Justice Alito that many of us have been thinking of them and referring to them as bigots for years.

But a question has been posed to me since the Supreme Court ruling and my post on Friday which referred to people who oppose same sex marriage as bigots:

Is it fair to label these people with such a pejorative term?

I have always used the word “bigotry” and “bigot” instead of “homophobia” and “homophobic” because few (if any) of the people who oppose same sex marriage are actually afraid of homosexuals. Rather, they want to limit the rights of homosexuals based solely on the grounds of sexual preference.

Bigotry seems like the right word to me, and therefore, labeling the practitioners of bigotry as bigots has also made sense.

But it’s been argued by some that bigot is not a fair characterization. Some have told me that they have gay friends who they love dearly, but despite their friendship and love for their friends, they believe that the institution of marriage should be reserved for heterosexual couples only.

Does the love that a person feels for a gay friend or family member preclude them from bigotry, regardless of any political or religious stance they take against the gay community?

Can you love a person but simultaneously deny them the right to marry whomever they love and not deserve the label of bigot?

On it’s face, it strikes me as similar to the attempt to deflect the label of racist by claiming that you have black friends. But consider this:

What if we were living prior to the 1967 Supreme Court decision that legalized interracial marriage across the country? If you were opposed to interracial marriage but also had African American friends who you loved dearly, would those friendships preclude you from being referred to as a racist?

Would you be expected to respect his or her religious beliefs?

Would you think of your friend as anything but a racist?

So why is same sex marriage any different? If you believe that homosexuals should not be permitted the right to marry while simultaneously supporting your own right to marry, I have a hard time thinking of this as anything but bigotry. Your opposition may be based on religious grounds, but when you choose to adhere to one bit of Scripture while ignoring hundreds of less convenient lines of Scripture, I think that amounts to bigotry.

And if you are engaged in bigotry, I think the word bigot is appropriately applied. It need not be applied constantly and need not be shouted at people, but it is a label that seems unfortunately fitting.

That said, I am always open to listening to alternative views and relish debate, and I recognize that labeling someone as a bigot is an excellent way to cut off honest and sincere discussion. It’s a divisive word that will not encourage dissenters to engage in conversation. It’s an exceptionally strong word, and it’s not a very nice one. I wish there were something equally appropriate but slightly less offensive.

Then again, denying the right of a person to marry and enjoy equal the legal and economic benefits to marriage simply because their marriage does not adhere to your definition of marriage as defined in a religious text from which you cherry pick some ideas while completely ignoring others is also not very nice.

All of these people are now thought of as bigots, and their bigotry seems unfathomable and horrendous by today’s standards. So, too, will the opponents of same sex marriage. Twenty years from now (and probably less), we will look back on these days and wonder how gay Americans were ever denied the right to marry. Our children will wonder what the hell their parents and grandparents were thinking. We will look back on the days before this Supreme Court decision the same way we look back upon the decision to legalize interracial marriage in 1967.

We will wonder why we even needed a Supreme Court decision to do what was right and fair and just.

If Alito is concerned about being labeled as a bigot, I suggest that he step out of a long line of bigots and into the 61% of Americans who recognized this basic right to marry even before the Court’s decision was handed down. Bigot is not my favorite word, and it’s a decisive word, but it’s also the right word.

Americans are moving on, Justice Alito. We are continuing our long march toward justice and equality. Join us or risk being judged by history as the bigot that you currently are.