Last night I took the stage at the Music Hall in Williamsburg and won another Moth GrandSLAM.

There are few things more thrilling in my life than having the opportunity to take a Moth stage and tell a story, and Moth audiences are the kindest and most generous audiences in the world. The support and love that you feel while telling a story and after your story is indescribable.

Storytelling, when it’s at its best, is never a solo act. The actual performance narrows down to a single person, standing in front of a microphone, telling the story, but the process involved in preparing a story is so much longer and in many ways considerably more difficult than the six or seven minutes spent onstage.

I wouldn’t have come close to winning last night had I not received the advice and feedback of others. As with most creative endeavors, storytelling should be a collaboration. I often think that the best storytellers are the best listeners. They are the storytellers who are willing to listen openly and with humility. They are willing to set aside ego and personal interest in favor of an authentic collaborative process.

Both of these women made my story better. Their DNA can be found between many of the words that I spoke.

Similarly, I performed for The Moth earlier this week at a special benefit show, and in preparing that story, two people contributed to that story as well:

My wife also contributed enormously to the original version of the story, which I had told at my first Moth StorySLAM back in 2011, including kicking me in the shin when I tried to chicken out from taking the stage.

That kick changed my life. 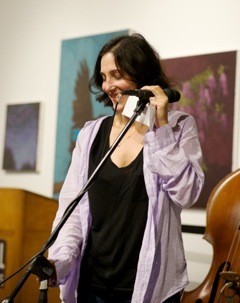 When I took the stage on Thursday night, I felt great because I knew that a team of storytelling geniuses had helped to make my story the best it could be, and I was thrilled with the result.

When I take the stage to tell a story, as I did last night and earlier this week, I am always standing on the shoulders of brilliant people – usually women – who have carried me to the point that I am ready to perform. They are almost always the type of people who seek to deflect credit whenever possible and remain just outside of the spotlight.

I have always wished that a story could end with the storyteller crediting those silent, behind-the-scenes storytelling ninjas who have made the story possible. It might not be the right note upon which to end a story, but it feels like the right thing to do. Part of my wishes that at the end of every story, I could simply pause for a moment, allow the applause to die down, and then name the people who were critical to my success.

Or maybe I could just wear a shirt onstage that reads:

“This story was brought to you in part by my beautiful wife, Elysha, and the brilliant Jenifer Hixon.”

Or maybe I could set up a sandwich board beside me onstage that reads:

“Be sure to thank Kirsty Bennett and Maggie Cino if you enjoy my story tonight. It’s their story, too.”

It’s easy to see a single storyteller in a single spotlight and assume that he or she is a solo act. This is rarely the case.

And I think it’s easy for people like Elysha and Jenifer and Maggie and Kirsty to think that their contributions were small and less than critical to the story’s success.

This is never the case. I know it, and I am forever grateful to them for all that they have done to help me.

I only wish my audience knew it, too.