There have been many improbable moments in movie history, but I would argue that there is nothing more improbable than the final scene from The Goonies, in which Chunk invites Sloth to live with him.

Let’s put all custody issues aside, though they would be considerable.

Is the movie-goer really expected to believe that Chunk’s parents are going to assume responsibility for this inarticulate, mentally challenged, rage-prone man simply because their son loves him? 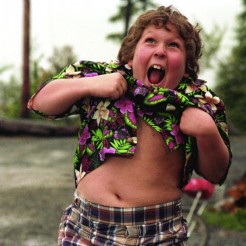 Presuming that this lower-middle class family has the space in their home for this seven-foot monster, the dental expenses alone would be astronomical.

Add to this the speech therapy, plastic surgery, job training and years of counseling that will be required in order to overcome the fact that he was physically and mentally abused by his siblings, rejected by his mother, forced to live in chains in the basement for most of his adult life, and is ultimately responsible for his family’s incarceration. 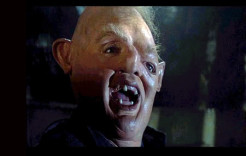 Is this even within the means of Chunk’s parents?

Remember that this is a family who was about to lose their home to a wealthy land developer. Sure, they have the profit from the sale of some pirate jewels, but are we expected to believe that will be enough money after paying off the mortgages of half a dozen families to fund Sloth’s life of constant, continuous  care?

Or that Mikey, the owner of the jewels, would even be willing to provide such funding?

And what happens to Sloth when Chunk goes off to college?

His parents are stuck living with and caring for an enormous, mentally deficient man thanks to a spur-of-the-moment offer made by their son while in the throes of post-traumatic stress?

As a writer, the decision was simple:

Sloth should have died while saving the Goonies from certain death back in the cave or he should have been seen in the final frame of the movie, wearing an eye-patch and a pirate hat, steering One-Eyed Willy’s pirate ship on its final voyage.

Sloth might be the hero of the film, but let’s face it:

No one wants to live with him.

Even his mother kept him chained in the basement.

And while we’re on the subject of The Goonies, how the hell did director Richard Donner (and writers Stephen Spielberg and Chris Columbus) get away with naming his pirate One-Eyed Willy in a kid’s movie?

And please don’t tell me that any phallic allusions associated with that name did not exist in 1985, because they did. I was thirteen at the time and I remember cracking up every time someone said One-Eyed Willy’s name, and I still giggle sometimes when hearing it today.

What could Donner have been thinking?