I have to assume that the McRib will be coming to Connecticut shortly. I ate three McRibs during a two day trip to Indiana in the fall, and according to the McRib locator (yes, it’s a thing), there are confirmed sightings in Oklahoma and a possible sighting in Weymouth, Massachusetts. 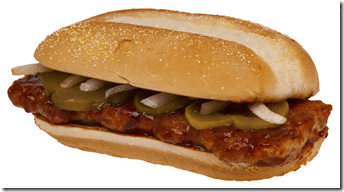 As Andy Dufresne wrote to Red in The Shawshank Redemption:

Remember Red, hope is a good thing, maybe the best of things, and no good thing ever dies.

While I wait, I’m happy to report that the McDonald’s cherry pie has returned for a limited time. I introduced Elysha to the cherry pie years ago, and it ranks with things like Buffy the Vampire Slayer, Battlestar Galactica, macaroni and cheese and hotdogs, and go-karting as some of the best things I’ve brought to her life.

If you doubt me, try one of those cherry pies and see for yourself. 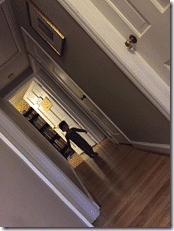 Before the McRib makes it’s mighty return, let’s c;ear up something that became known to me just yesterday regarding the sandwich.

It has been repeatedly reported that the McRib contains some of the same ingredients found in yoga mats and running shoes. I assumed that this was true but didn’t care because delicious is delicious.

It turns out that it’s not true. It’s merely a rumor, probably perpetrated by kale aficionados  or Whole Foods shoppers or Burger King enthusiasts.

Here’s the truth, from a fact sheet produced by McDonald’s:

The truth is a small amount of Azodicarbonamide, a common flour-bleaching ingredient, is used in our McRib bun. This is a common food additive and is used in many items on your grocer’s shelves, including many hot dog buns and other bread products that you probably already purchase. It is regulated under the FDA and is considered safe. It is not a yoga mat, plastic or rubber.

A variation of Azodicarbonamide has commercial uses and is used in the production of some foamed plastics, like exercise mats. But this shouldn’t be confused with the food-grade variation of this ingredient.

Yet rumors persist. Smug foodies ignorant nonconformists cite this nonsense all the time.

Next time you hear this claim, push back on it, please. Say something like “Repeating incorrect facts that you probably heard third-hand and didn’t bother to confirm doesn’t make you knowledgeable about food. Just stupid about knowledge.”