At the end of each month, and now at the end of the year, I report on the progress of my New Year’s resolutions (or lack thereof).

Overall, I completed 35 of my 51 goals for a completion percentage of 69%.

This is higher than my 13-year average of 54.7% and my second-highest success rate ever.

Here are the previous year’s results.

Some of my goals were missed for good reasons.

My writing a memoir was placed on the back burner when my agent told me that the memoir market is not exactly sizzling at the moment for non-celebrity types like me.

My screenplay is very much waiting for my writing partner to complete it, though I rightfully could’ve started writing another one.

Others were very much my fault, and some were downright disappointing.

Failing to take a weekly photo of Elysha and myself, failing to spend adequate time with my friend, Bengi, and failing to write to colleges (all for the second year in a row) immediately come to mind.

Elysha and I also failed to record a single episode of our Speak Up Storytelling podcast in 2022, which not only disappointed fans but certainly impacted sales for my new business.

I only played two games of poker in 2022. Granted, more than six games were scheduled but canceled when I failed to find enough players for each game, but I love poker. I need to find new blood if my friends are going to fail me routinely.

My failure to transfer our wedding video off an ancient computer and my failure to produce a hardcopy of “365 Days of Elysha,” both for the third year in a row, are deeply disappointing. I had 365 days to complete each task but failed miserably.

Nevertheless, 2022 was an excellent year in terms of overall goal completion. Here are my results through the end of 2022.

Another year spent avoiding death. I began 2022 in isolation with COVID-19 and recovering from hernia surgery, but it was smooth sailing after I recovered.

I lost eight pounds in December, entirely due to illness at the end of the year. I dropped all eight pounds in a week as a result of a complete loss of appetite and constant fever.

My handicap established at the beginning of 2022 was a whopping 35.4.

The follow-up to “Storyworthy” – “You Are Storyworthy” – won’t be my next nonfiction title, but it’s written. I’ll be writing a different storytelling book first for strategic reasons.

Still, the book is done and will eventually be published.

One picture book is completed and in the hands of my agent. We will be looking for a publisher shortly.

“Who Put the Baby in a Tree?” and a still-untitled picture book are also finished. I’ll need to revise both before sending them over to my agent, but solid first drafts are complete.

One about the two-year period when I was arrested, jailed, and tried for a crime I did not commit, which also led to homelessness then a pantry off a kitchen that I shared with a goat. I was also the victim of a horrific robbery at that time that left me with a lifetime of PTSD, amongst other awfulness. Also participation in an underground arm wrestling and gambling ring.

The second is about the two-year period in which a lowly band of anonymous cowards attempted to destroy my teaching career.

My agent and I have decided to put these books on the back burner. Memoir is a tougher sell right now unless you’re a legitimate celebrity or the inventor of a bionic eye.

Both ideas will make excellent books, but neither was completed in 2022.

My plan in 2022 was to write a screenplay with a partner, but his schedule prevented that from happening. I could’ve written a screenplay on my own, of course (as I’ve done in the past), but I did not.

This goal took an interesting turn in 2022.

I started the year working on a solo show based on my arrest and trial for a crime I didn’t commit. Though I continue to work on that show, I’ve started working with a director on a new show, and we’ve made substantial progress.

I’ve already inquired about the availability of local theaters in early 2023 and received some possible interest.

I also had a new idea:

List all the things I’ve ever stolen on a chalkboard and then tell a story about each one. Cleverly construct a narrative that encompasses all the stories in a larger story of my life.

I’ve been structuring that idea, too.

Substantial progress was made in 2022 on several fronts, but none of these shows are complete.

Writing commenced in 2022, but it’s still almost entirely in outline form, so a lot of work is still needed.

Seven essays were submitted to the New York Times in 2022.

Two letters were sent in December to finish off the year. I wouldn’t have sent those letters had I not set this goal. Just another reason why goal setting is so damn important.

A total of 17 letters were written in December, including letters to students, my own children, authors, Nancy Pelosi, and a handful of creative souls.

A total of 201 letters were written in 2022. By far the most letters I have ever written in a single year.

I’ve passed this project on to my production manager, but she’s busy with other things at the moment.

In December, I read “Foreverland” by Heather Havrilesky

“Fairy Tale” by Stephen King
“From Saturday Night to Sunday Night” by Dick Ebersol
“Wow. No Thank You” by Samantha Irby
“Think Like a Monk” by Jay Shetty
“The Groucho Letters”

My list of completed books now includes the following:

“Foreverland”
“We Don’t Need Roads: The Making of the Back to the Future Trilogy”
“Confidence Man”
“Telephone”
“I’d Like to Play Alone, Please”
“Revolutionary Summer: The Birth of American Independence”
“The Nineties”
“The Presentation Secrets of Steve Jobs”
“Nice Try”
“The World’s Worst Assistant”
“Adventures in the Screen Trade”
“I’ll Show Myself Out”
“How to Tell a Story”
“The Lightning Thief”
“Contagious”
“In the Great Green Room: The Brilliant and Bold Life of Margaret Wise Brown”
“It’s So Easy”
“Poetics”
“The Office BFFs”
“Making Numbers Count”
“The Passion Economy”
“Empire of Pain”
“The Anthropocene Reviewed”
“Liar’s Poker”
“Matrix”
“Coreyography”

Three letters were written and sent in December to Amy Edmondson, Chuck Klosterman, and Chip Heath.

19. Complete the recordings for my new business for at least two target consumers.

I completed the recordings for only one target customer (and I’m re-recording those videos).

LinkedIn has become a place where I regularly post content and find new customers and business partners.

I pitched to a total of five TEDx conferences in 2022.

Two have passed on my pitches. I await word on two others. TEDx UConn has accepted me for their conference in February 2023.

I won a StorySLAM in New York in February.

I won a StorySLAM in Boston in June.

I won a Moth StorySLAM in Washington, DC in August.

I won a Moth StorySLAM in Boston in December. I won Boston’s Moth GrandSLAM at The Wilbur on April 26.

I won New York City’s Moth GrandSLAM at The Music Hall of Williamsburg on May 16.

It was my eighth and ninth GrandSLAM championships.

26. Produce at least 12 episodes of our podcast Speak Up Storytelling.

My personal channel is re-designed and curated. My team has also launched a second YouTube channel for our new business.

I pitched one story to This American Life in April.

Three pitches were made in 2022. No response.

The basement was later upended when I had a studio built in a significant portion of the basement, so this goal will need to return to my 2023 list because work is once again required.

Books were removed from the kids’ bedrooms and divided into three bunches: 36. Take at least one photo with Elysha and me each week.

I took photos of Elysha and me in less than half of the weeks in 2022. 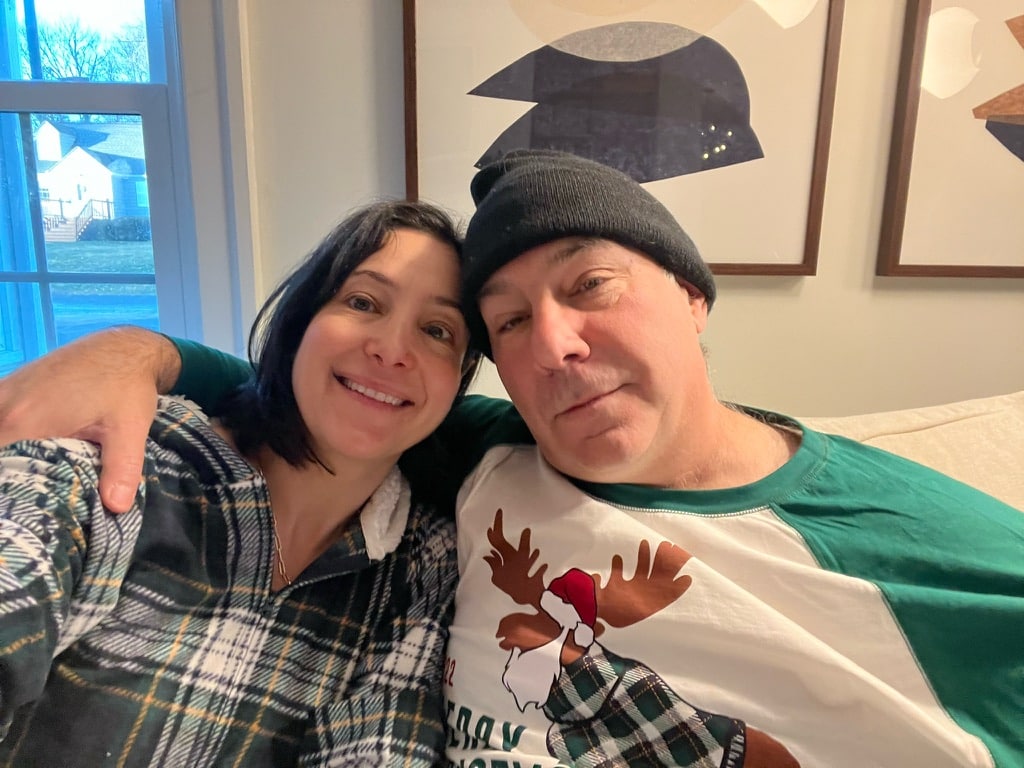 37. Plan a reunion of the Heavy Metal Playhouse.

A date had been chosen for August, but because of vacations, I need to reschedule.

This has become nearly automatic for me.

Upon reflection, it turns out that I do this far more often than I realized. Between my students, my clients, and my wife and kids, it’s almost automatic.

I surprised Elysha by dropping off her phone and a card at her school after she forgot the phone at home. Doesn’t sound like much, but after finding the phone on her desk, she texts:

“Honey, you’re the best and some kind of magician. I love you sooo much.”

So a legitimate surprise.

I also mailed a letter to every one of her students to open in class. I received a lovely collection of kindergarten responses.

42. Spend at least six days with my best friend of more than 30 years.

Done! Emergency preparedness kits were purchased. Several items were added to each.

Songs I’ve memorized this year include:

46. Convert our wedding video to a transferable format.

Another task passed off to my production manager. Apparently, this is trickier than previously expected. I need to find a professional to make this happen.

48. Write to at least three colleges about why they should hire me.

Done! My social media team is now running parts of my Instagram, and I understand what they are doing, how they did it, and why they are doing it.

I’ve reached out to a local church and the town of Newington in an effort to move the project from Blackstone, MA to Newington, CT and perhaps involve Charlie’s Boy Scout troop. I have yet to connect with the person in charge because even small-town government moves slowly.