People are weird. People are crazy. People obsess over things, worry about things, and develop rituals around things that baffle and confuse the people around them.

It’s okay. As long as you’re not hurting anyone, it’s really okay.

But here’s my advice:

Don’t deny it. Don’t defend it. Don’t attempt to mitigate it. Simply own it. Admit to it, acknowledge it, and people (I promise) will accept you.

It’s only when you attempt to defend your crazy as normal that people get annoyed, frustrated, and angry.

It’s only when you refuse to own your crazy that you risk being perceived as crazy.

I wear wireless headphones on my head. I wear them almost all the time. I have them on now. I wear them in my house, in the car, on the streets, and while walking the hallways at work. Whenever I am not speaking or listening to someone or writing, there is a book or a podcast or a song playing in my head.

This is not normal. It’s kind of crazy.

But a man walking through life wearing headphones almost all of the time is not normal. It’s kind of crazy. When I acknowledge that it’s kind of crazy, people nod. They smile. They even laugh. And that’s the end of it.

I own my crazy.

During the school year, I eat the exact same food for breakfast and lunch almost every day without variation. Egg McMuffin for breakfast. Oatmeal for lunch.

That is kind of crazy.

It reduces the amount of time I spend eating considerably. It eliminates time spent making food choices or preparing other meals. And I like Egg McMuffins and oatmeal. The Egg McMuffin provides a good breakfast, and the oatmeal is an excellent means of keeping your cholesterol down.

I lowered my cholesterol  by 40 points in one year by just eating oatmeal every day.

But eating the same thing every single day is crazy. I know it. I own it.

I won’t allow my 12 year-old and 9 year-old children to eat grapes unless I am present during the consumption. I am quite sure that the moment I turn my back, a grape will become lodged in each of their throats, simultaneously, and they will choke to death.

So no grapes unless I know I will be in the same room while they are being eaten.

Crazy. Lunacy, even. I acknowledge every little bit of it. Not normal.

My friend tells me that this advice is pointless because people are not self aware. He says that it’s rare for a person to possess actual introspection. He claims that it’s almost impossible for people to turn a critical eye upon themselves.

So if you’re the parent of a five year-old daughter, and you’ve never left her with a babysitter because you fear for your child’s safety, that is completely understandable.

Rather than attempting to defend this position, simply say, “I really can’t leave my daughter with anyone except my sister at this point. I can’t even leave her with my best friend. I know. It’s a little crazy. It’s just the way I’m doing things right now.”

Crazy, but no problem.

If your children spend more time sleeping in your bed than their own, that’s okay. I know many parents with this unfortunate arrangement.

But it’s crazy. Just say it.

“Yes, my three kids sleep in our bed a lot of the time, and I even have a cot at the end of the bed for one of them. Sometimes my husband has to sleep in the kids’ beds to get some sleep. It’s absolutely crazy, but I’m not ready to change things yet.”

Just own your lunacy.

If the television is on in your house all day long, that’s kind of crazy.

If your preferred leisure activity is shopping, that’s kind of crazy.

If you mow your lawn three times per week, that’s kind of crazy.

If you can’t leave your six cats alone for more than three hours at a time, that’s kind of crazy.

If you wash and wax your car every other day, that’s kind of crazy.

If you don’t ever read a book, that’s kind of crazy.

If you refuse to ride in a car unless you’re the driver, that’s kind of crazy.

If you don’t want to just split the check evenly because you had one less drink than your dinner companions, that’s kind of crazy.

All of those examples are actual bits of crazy from people I know or have known over the years. In some cases, the people acknowledged their crazy. In many cases, they did not.

Simply acknowledge that your actions are not normal, and people will be far more accepting and even sympathetic to your needs. They are more likely to accommodate you needs. They will be more understanding.

Deny your crazy and risk being perceived as legitimately crazy.

Own your crazy and you’ll be perceived as normal. 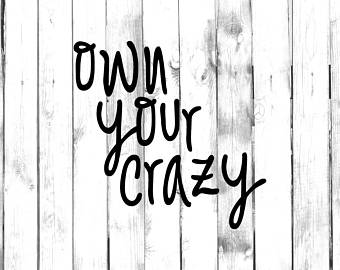