Most of my misses are related to locations where I have not yet traveled.

Also, for the record, I have no desire to fly in a helicopter, go on a cruise, downhill ski, jump out of a plane, get a piercing, or get a tattoo, so achieving 50 out of 50 will be impossible unless I experience multiple changes of heart.

But I’ve had at least 7 rides to the hospital in the back of an ambulance, so I think that should count twice.

I’ve had more speeding tickets than you could possibly imagine – when I was much younger, of course – so maybe that should count for two as well.

Also, I’ve never served on a jury, but I’ve been on trial for a felony which seems like an even higher bar than just serving on a jury. My arrest and subsequent trial has actually kept me off juries in the past, so perhaps I should get credit for that one, too.

Then again, this is just a random list that someone sent to me, so arguing over semantics is probably unnecessary.

In fact, I should just make my own list.

For example, why does the list ask if I’ve “Been to Paris” but “Visited Mexico?” Pick a paradigm and stick to it.

Also, the word “horse” is not a proper noun, so it shouldn’t be capitalized. And it’s adjacent to “Rode an elephant,” which isn’t capitalized.

In what bizarre mind are horses and elephants different when it comes to capitalization?

Fear not. You won’t suffer these indignities when you’re answering the questions on my equally meaningless list, coming soon. 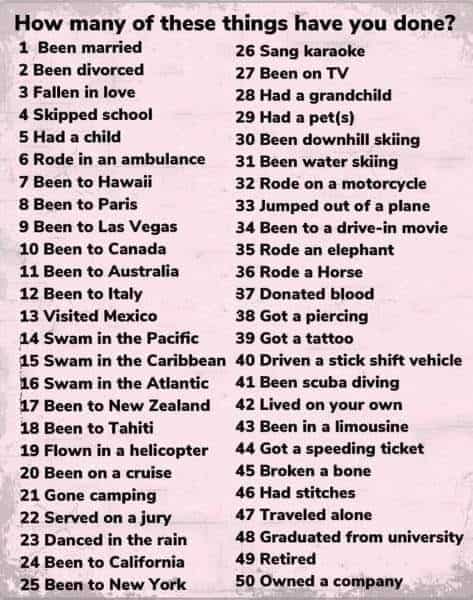