My classroom was painted last summer, so for the first time in a long time, I had to pack up certain items that I had not moved in a very long time.

This basket was one of those items.

As I was placing it into a box, it occurred to me that this plastic basket has been around for a long time.

Twenty-two years ago, I took over for a teacher named Christy Neagle who was leaving on maternity leave. I had passed on a permanent position in a school around the block from my home for an opportunity to work for a principal who I liked immediately. Already admired. My friends thought I was crazy, but I felt like I had to take the chance. I felt like this school was special.

I entered that classroom near the end of the summer, unsure if she would be back next year, feeling a little bit like an interloper. A placeholder of sorts.

I can still see that classroom as clear as day. Every inch of it. Parts of it suited me just fine. Others did not. It wasn’t that they were wrong. They just weren’t for me. But it wasn’t really my room, so I adapted and moved on.

It wasn’t until January when my friend and colleague, Donna Gosk, walked into the classroom, looked around, and said, “Matthew, this classroom is yours now. Do something with it.”

It was the permission I needed to make changes.

Christy did not return from maternity leave, so I remained in that classroom for the next three years. It was a good room. It looked out onto a field and forest before an addition to the school replaced my view with a brick wall. It was the classroom where I first read Shakespeare to children. Conducted my first science fair. Hosted my first Halloween party with the help of some overly enthusiastic parents.

It was the classroom where I fell asleep at my desk in the middle of the day as my students quietly read, unaware that I had pneumonia.

It was the space where I picked up the phone on a Monday morning and was told that a plane had flown into the World Trade Center.

The addition to the school included a new library, which meant the old library on the other side of the building was divided into two classrooms, and one of them became mine. I had the opportunity to make a bunch of design decisions as the room was reconfigured by construction workers, including a connecting door to the adjacent classroom, just one annoying bulletin board, and stage lights welded to the beam on the ceiling in preparation for the stage, sound system, and theater curtain that I would eventually install.

It’s been my classroom ever since. Eighteen years and counting.

Very little remains from that first classroom that I took over more than two decades ago, but this blue basket, and two red ones just like it, are still with me. They might be the last things that still exist from that classroom that Donna Gosk told me to make my own.

I can’t help but wonder when this basket first arrived in our school. How long it has been holding ungraded spelling tests, homework assignments, and the like? Did the previous teacher purchase these baskets for her classroom, or did she assume ownership when she arrived in our school like I had from her?

As someone who has almost nothing tangible from his childhood, I’ve always had a great fascination for the history that objects possess. My aunt recently sent me a book of poetry that my mom had read in school, complete with her name on the inside cover, indecipherable notes in the margins, and dog-eared pages. It even has her classroom number written on the inside cover:

Oddly, I think I know that room, though it no longer exists. My mother’s high school was my middle school. Room A-201 was my sixth grade homeroom and math classroom. Mrs. Shultz. A teacher who changed my life in many ways.

My mother might’ve sat in that same classroom with this same book.

Instantly, it’s become precious to me. One of my most treasured possessions.

It’s so strange. Some unimaginable version of my mother – a teenage version who I will never know and will sadly never know much about – once held this book in her hands. Read the poems contained therein. Thought about the words in the same way I think about words today.

This book – Modern American Poetry – and this simple, plastic basket have traveled through time, marking the years, seeing what I will never see, passing through a time and space before me.

A time and space I so wish I could glimpse and know. 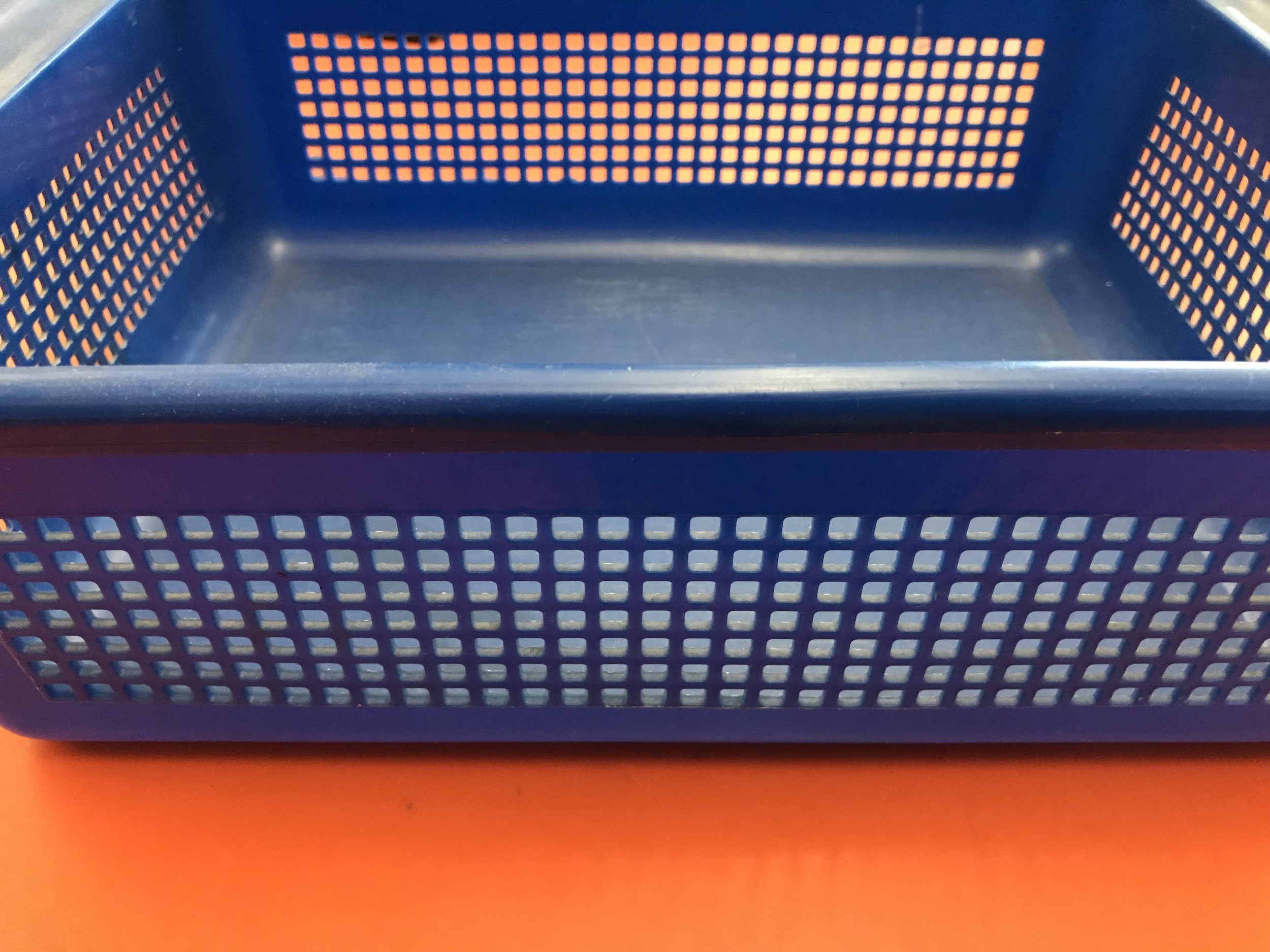