A couple weeks ago, my friend gave birth to a baby daughter.  A couple hours after the delivery, my wife and I sent the happy couple a bouquet of flowers.

While on the phone with the gift shop manager, I asked if there was an item in the store that was so ugly or strange that it rarely sold.  Almost instantly, she answered by describing a bizarre, creepy, headless jewelry holder that she claimed had never been purchased during her three years of employment at the shop.

It would have been easy to send up a teddy bear or a pair of booties, but I like to try to be memorable in all that I do.  Some may find a gift like this to be strange or unnecessary, but when presented with the opportunity to do something different, I usually jump at the chance. Ten years from now, the teddy bear or the booties would have been all but forgotten, but an unexpected, out-of-place, downright ugly gift will surely be remembered.  It will become a fixture in the story that they will one day tell their daughter about her first day of life.

I was also hoping that it would be their daughter’s first gift ever, therefore making it almost impossible to throw away and thus increasing the probability that it will stick around for a long time.

And remarkably, it was even more bizarre than I had imagined.  When I visited them earlier this week, I found the creepy looking thing sitting on their coffee table. 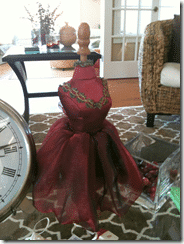