I played golf last week with a guy who has a 3 handicap.
For you non-golfers, this means that he is an extremely good player. And by all accounts, he was, scoring well under par for the first six holes.

Which is why it annoyed me so much when on the seventh hole, he hit a tee shot that flew wide right, and he opted to take a mulligan and hit again.

A mulligan, for you non-golfers, is a do-over. It’s a chance to hit another ball after an errant shot. Golfers who play with mulligans generally permit themselves one per round, thought I’ve played with knuckleheads who take as many as they please. 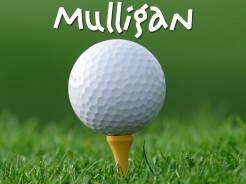 My friends and I do not play with mulligans, and rightly so. We treat every game as if we were playing in the US Open. We play by the rules. We require each other to makesix inch putts when most golfers would be permitted to pick up the ball on the assumption that their putt would be good.

We are bastards on the golf course, but we play the game correctly.

And none of us is even close to a 3 handicap.

I despise mulligans, for three reasons:

1. Golf is the only sport that allows this kind of ridiculous do-over. It is akin to getting a fourth strike in baseball, a third free throw in basketball, or a fifth down in football. For a sport that is supposedly predicated on integrity and is famous for its players assigning themselves obscure penalties, there is no room for a mulligan at any level.

2. Golf is a game of personal bests and moments of potential greatness. Stick a mulligan into a round and you ruin your chances for both. What if, for example, that 3 handicapper went on to shoot his lowest round ever, including a hole-in-one on the last par 3?

Unlikely? Yes. But not impossible.

So now what? He’s got the scorecard of his life in his hand, but on the seventh hole, he took a mulligan, thus tainting his round.

Does he frame this illegitimate scorecard?

Does he tell his friends about the mulligan when describing the round?

Does he conveniently forget about it?

One never knows what could happen on a golf course. Unlike most sports, you can play golf exceptionally well or exceptionally poorly on any given day, and it is completely unpredictable. Playing with a mulligan taints a player’s opportunity for genuine greatness.

3.  But here is the biggest reason why I despise the mulligan:

A mulligan is almost always taken after an errant tee shot and never anywhere near or on the green.

In other words, it’s perfectly acceptable in the minds of many golfers to take a second tee shot if the first has sliced into the trees or rolled twenty yards from the box. But it would never be considered appropriate to take a mulligan after missing a 6-foot putt or failing to get a ball out of a sand trap.

For some reason, a premium is placed on the tee shot, and doing so favors the long ball hitters by giving them a second chance to take advantage of the part of the game that they excel at most.

I am a good putter. It is probably the best part of my game. But if I was playing with a mulligan, I would never be permitted to take a second shot at the 30-foot putt I just missed. Taking a mulligan on a putt is unheard of.

I would have to live with my miss, as I should. As should we all.

The mulligan also negates the dangers inherent in being a long ball hitter.  Because these guys can hit the ball great distances, an errant shot can often be costly. There is no telling where the ball may land, or even if it will be found. For a player like me, who does not hit a long tee shot, the one advantage I have is that my tee shot rarely gets me into trouble. I don’t hit the ball far enough to lose a ball or end up buried in the woods.

Give a long ball hitter a mulligan and you’ve given him every reason in the world to swing out of his shoes, because he has a do-over in his pocket.

Despite the integrity and tradition attached to this game, I continue to play with guys who take at least one mulligan every round. And even worse, it seems like the better the golfer, the greater the chances that he will take a mulligan.

So here is my plan:

The next time I play golf with a guy who takes a mulligan, I am going to purposely miss a putt on the subsequent green.

Hopefully an easy one. A three footer.

Then I’m going to walk over to my ball, pick it up, return it to its previous spot on the green and say, “Yeah.  I thought I’d take a mulligan, too.”

I can’t wait to see what happens.