Down 12 pounds as of this morning. I might actually accomplish this after all.

I didn’t drink soda from a two-liter bottle in August. Soda consumption continues to fall dramatically and water consumption is on the increase.

I continue to practice yoga every morning. I am still not good. I still need a refresher from my coach. I will try to get one this month.

6. Learn to cook three good meals for my wife.

I have three recipes to plan for courtesy of a good friend. I have done nothing with them thus far.

Good news! My publisher and I have agreed on a new two book deal, including this novel. It will not be completed by the end of the summer, so I am adjusting my goal is the end of 2015.

In fairness, I’ve written more than a novel’s worth of content this year, spread between three different books, but none are completely finished.

This book is also more than half finished.

9. Sell one children’s book to a publisher.

Four of my children’s books are in the hands of an actual editor who requested to see them. We await word on any potential offer.

The memoir is written and polished. It will be paired with my book of essays, so it remains on my laptop, waiting for the essays to be complete.

11. Sell a book of essays to a publisher.

My book of essays was pitched did not sell, but the revised version of the project is moving along at a rapid pace. Based upon the feedback from editors during the first round, we are very hopeful.

12. Complete a book proposal for a book on storytelling.

Progress continues. It’s now fully outlined. I need to write 2-3 sample chapters and the actual proposal. Elysha thinks that completing this proposal should be a priority, so I have made it such.

Revisions of my first screenplay – based upon film agent’s notes – are nearly complete.

I have decided upon the story for the next screenplay and have the story fairly well outlined (thanks in part to a friend’s excellent suggestion).

The collection of essays that I am writing now encompasses this period of time. This book and the book of essays are now one and the same.

15. Write a musical for a summer camp.

Done! I was lucky enough to see it performed onstage in July. The feedback was outstanding. I hope to find a home for it at some point.

The musical that we wrote for last year’s summer camp will be produced this fall at schools and other venues in the Hartford area. I am thrilled.

16. Publish at least one Op-Ed in a physical newspaper.

Done! I published an Op-Ed in the Hartford Courant in July on why I choose to write in McDonald’s restaurants.

I’ve also been asked to write another Op-Ed for the Courant for October. My dream is to land a weekly column at a newspaper like the Hartford Courant someday, but this is probably a hard gig to get.

17. Submit one or more short stories to at least three publishing outlets.

I submitted one of my short stories to a student magazine in Sao Paulo, Brazil, and it was accepted. The bar for acceptance was admittedly quite low, but it counts.

18. Select three behaviors that I am opposed to and adopt them for one week, then write about my experiences on the blog.

I spent a week in July backing into parking spots, which was something I assumed was only done by lunatics of the highest order. I’m in the process of writing about my experience in for a blog post (or perhaps an Op-Ed somewhere).

I’m on the hunt for my second behavior. Suggestions?

21. Produce a total of eight Speak Up storytelling events.

We produced our seventh show at Real Art Ways in August. Our next show on September 12 at the Noah Webster House in West Hartford, CT will complete this goal. We will exceed it by at least three by the end of 2015.

Done! The recording was released in August. One of the cameras did not record my talk, and the other started about two minutes late. The recording is disappointing and useless. I have the worst TED luck ever.

Done! It’s a single page on my new author website, and it’s not nearly as robust as we want it to eventually be, but Speak Up finally has a webpage where you can find dates of events, ticket information, an opportunity to sign up for the mailing list, and more. You can find our webpage at speakupstorytelling.com.

24. Attend at least 10 Moth events with the intention of telling a story.

Done! I attended three Moth StorySLAMs in August and told stories at all three events. This brings my total number of Moth events in 2015 to 18.

I’d like to double this win total before the end of the year. 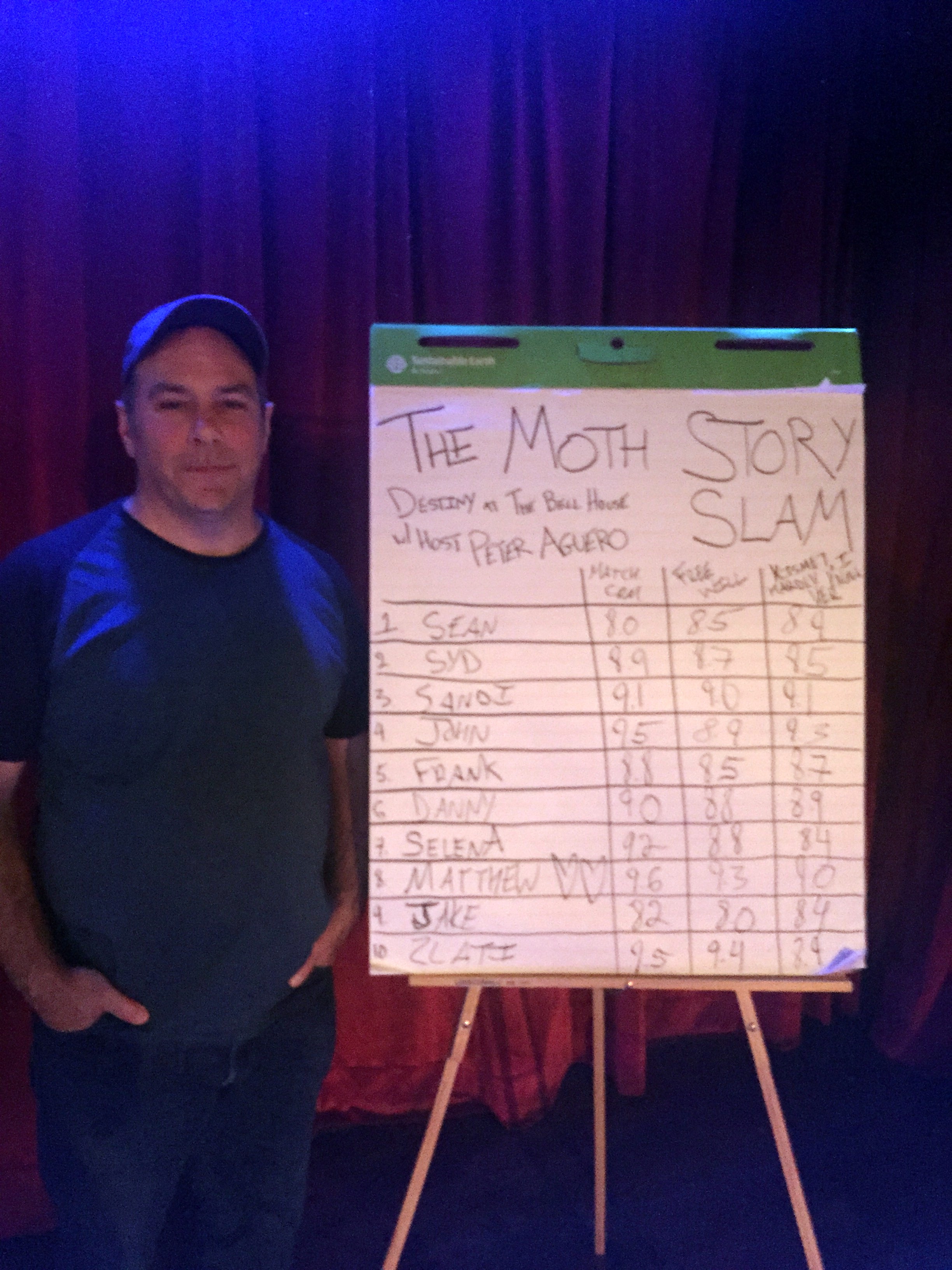 Done twice over! I won the New York GrandSLAM at the Music Hall of Williamsburg in April and June.

27. Launch at least one podcast.

We have a name. We have a recording date. It should publish before the end of October.

No progress in August. So far I have pitched two new projects to two smart people.

29. Host at least one Shakespeare Circle.

30. Enroll in the final class needed for certification as a high school English teacher.

I did not break 100 in the month of August. I shot a 48 for nine holes, which was three off my personal best.

32. Post my progress in terms of these resolutions on this blog on the first day of every month.