Daily Candy wedding expert Shawn Rabideau offered his Top 10 Wedding Tips recently, and I thought that most of his ideas were fairly obvious.

There were also a couple that I didn’t agree with at all.

Rabideau suggests that if you’re going to get Botox, do it six weeks before the wedding. I think his advice should read:

Botox is stupid, vain, and disgusting.

After reading the list, I asked me wife if I could be considered a wedding expert like Shawn Rabideau. Rabideau qualifications, as far as I can tell, are a background in design and event planning and appearances on several bridal-based television series.

My qualifications are as follows:

As a DJ, I’ve worked at more than 300 weddings, assisting clients to plan and execute their event. 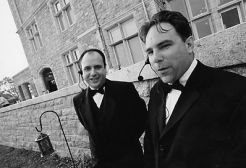 As a minister, I have married about more than a dozen clients, including gay and lesbian couples.

I have been married twice.

I have served as a best man once and been in a bridal party on several occasions.

After considering my qualifications, my wife agreed that I constitute a wedding expert, and as such, I offer you my list of Matty’s Top 10 Wedding Tips. And because everything should be a competition, I’d appreciate it if you would let me know which list is better, mine or wedding expert Shawn Rabideau’s list.

1. If you are getting married outdoors, do not use a runner. They serve no real purpose and only create problems. While they may look lovely, they are often difficult to unroll in the midst of a ceremony, are high susceptible to wind, and often get caught in women’s shoes. I have watched groomsmen battle with runners for five awkward minutes, trying to unroll them evenly. I have watched guests put their feet on runners to hold them down lest they blow away. Worst of all, I have seen bridesmaids and brides trip on runners again and again. They are not worth the trouble.

2. In order to avoid getting too tipsy at your wedding while still being able to pound a round of shots with your friends, instruct your bartenders ahead of time that the bride and groom’s drinks should be made with half of the normal alcohol as the rest of the drinks. This will allow you to drink more, be less concerned about the numbers of drinks that you’ve had, and still man-up at the bar when your college friends begin chanting your college nickname as you down your third shot with them.

3. When choosing the person who will actually marry you, take his or her voice into consideration. Unless he or she will be wearing a microphone, you want to hire someone who has the voice to carry the space effectively. There’s nothing worse than your guests straining to hear some wizened old man whose voice doesn’t carry past the first row. And when possible, avoid placing a microphone on the person marrying you. It’s often helpful for him or her to give you instructions and reminders during the ceremony that no one else can hear, but if you place a microphone on the person, that ability is often lost. Find a minister, rabbi or JP with a voice that will carry, so everyone can hear.

4. Be sure that all necessary announcements are made before your officiate declares you husband and wife. All too often (including the last two weddings that I have attended as a guest), I’ve seen an officiate say, “By the powers vested in me, I now pronounce you husband and wife.  You may kiss the bride…” followed by instructions about the receiving line, the cocktail hour, and even directions to the reception. You should kiss, smile and then enjoy your walk down the aisle, with all necessary business taken care of well before that moment.

5.  Tip your vendors at the start of the wedding. Most of the time, the best man or maid of honor are instructed to present the photographer, DJ, and videographer with a gratuity as the wedding is drawing to a close, and rarely is this tip dependent upon performance. For people who plan to tip their vendors, it’s pre-planned andpre-budgeted before the wedding ever begins, and unless the vendor completely ruins the wedding, the tip is given. If this is the case, present the tip to these people as early as possible. It will be equally appreciated but will place additional pressure on your vendors to perform. While I always give 100% of my effort as a DJ, I often find myself looking for ways to give 110% when I am pre-tipped.

6.  Bring a sewing kit that includes safety pins, ribbon that matches the bridesmaid dresses, and anything else you may need. At our wedding, a bridesmaid’s zipper broke an hour before the ceremony, but there was a supply of ribbon in every color on hand in case of emergency. In minutes, a perfectly matching length of ribbon had been woven into the back of the dress in place of the zipper, and the dress looked even better than those that still zipped up.  Recently I was called by a bride who asked me to stop at the pharmacy and pick up safety pins (which I always carry) because she was already at the church, as were most of the people who she knew, and a piece of her dress was coming undone. Another time I used paperclips to bustle a dress once when three clips broke. Save yourself the headache and have a complete sewing kit on hand in case of emergency.

7.  Have for formal photographs done before the ceremony. While this violates the tradition of the bride and groom not seeing each other before the wedding, you can still arrange a special “first look” moment prior to the ceremony and experience the surprise and romance of first seeing one another, and unlike a ceremony, you can actually speak to one another as well. By doing your formals ahead of time, you and your bridal party can enjoy the cocktail hour, which often amounts to about 20% of the actual reception. The bride and bridesmaids can ensure that their makeup and hair are perfect for the formals, rather than having to re-touch after the ceremony. There is no greater stress-remover than formals before the ceremony.

8.  Unless you are a professional dancer, do not choreograph your first dance. While taking lessons beforehand and having a variety of moves to use during your first dance is fine, planning a second-by-second, matching-the-music routine will only serve to increase your stress levels prior to the dance. In my experience, “choreographed couples” do not have as much fun prior to the dance and are often nervous and even scared in the moments leading up totheir dance, rehearsing in some backroom during the cocktail hour. Your wedding day is not the time for a debut performance. Save it for another day.

9.  If you decide to place disposable cameras on each table for guests to use during the wedding, do not send the cameras for development at the same time. Instead, develop one roll of film per month as a way of reliving your wedding day for months and months after the big event.

10.  Establish a firm end-time with your friends and family. You do not want to fight with your father about his desire to extend the wedding when all you want to do is take off your dress and get to the after-party. You also don’t want to end your wedding with your perfectly-chosen final song only to have your friends begin chanting “One more song” as the lights come up. Hardly the way you want to end your party, but sadly, more common than you might imagine. Let them know that when it’s over, it’s over.