As you may know, I was a part of the Knight Foundation’s lawsuit against Donald Trump which led to him being forced to unblock me on Twitter earlier this year.

Though I had always been able to see the inane ramblings of the self-admitted sex offender and bigot currently serving in the White House, now I can respond directly to him when the need arises.

It’s usually when I’m so annoyed that exercising my freedom of speech and firing off a response to his stupidity makes me feel better.

Yesterday, however, I discovered that I have now been blocked by Eric Trump, the debatably stupidest of the two Trump sons.

I know most comedians portray Eric as the dumb one, and he certainly has a slack-jawed, mystified gaze about him, but after the enormous number of obvious lies that Donald Trump Jr. told about his meeting with Russians in Trump Tower, the title for dumbest Trump son became a lot less certain for me.

Since Eric Trump is not a public official but only pretending to be running the Trump Organization on behalf of his self-serving, racist father, I am not outraged by his decision to block me.

A little annoyed, perhaps, because he’s so easy and fun to insult (which is why I was probably blocked) but I certainly understand that he’s well within his rights to silence me on Twitter.

I suspect that Trump Jr. will also block me at some point if my tweets rise to his attention, and since he is not a public official but only a possible traitor to the United States who is also pretending to run the Trump Organization, I will not be outraged by his decision to block me, either.

Disappointed but not outraged.

Ivanka, however, is a government official. She has chosen not to take a salary, but she’s still working for the government, so she cannot block me based upon the principles of the Knight Foundation lawsuit.

Unlike her father and brothers, Ivanka is not nearly as stupid on Twitter. She did tweet out this photo of her and her son exactly one day after Americans learned that her father was separating small children from their families and placing them in cages on the border, which might receive the tone deaf award of the century, and she also supports her corrupt, sexist, and bigoted father, but she rarely says something so stupid on Twitter than I feel compelled to respond.

She’s complicit and therefore shares the blame for this disastrous and evil administration, but she’s not nearly as fun to insult.

Eric Trump was good for that, but alas no more.

Apparently my words stung a little too much. 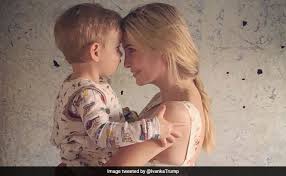