Eventually I would like my three-year old daughter to become a more than proficient reader, but tonight I found myself exceedingly grateful that she could not read a single word from the two books that she chose for us to read before bed.

The Little Golden Book versions of Lady and the Tramp and Noah’s Ark have an enormous number of words. Far too many for a little girl who was already twenty minutes late for bed. But we had no idea about the word counts when we agreed to read them. This was the first time that Clara had chosen them from her bookshelf. We assumed that these Little Golden Books would live up to their name. 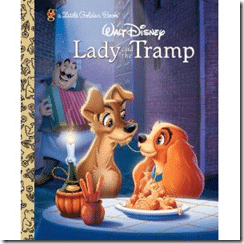 So when she insisted upon the books, my wife simply invented a story that contained considerably fewer words but still matched the pictures on each page.

Had Clara been able to read, this would not have been possible.

So hooray for my daughter’s illiteracy. I won’t be able to say this often, but tonight, I was happy that she is still unable to read.