Highlights from the Patriots 45-10 victory over the Denver Broncos:
My friend, Eddie, purchased a random ticket for the game while still in Norway and then flew into the US the day before the game. When he met us in the parking lot to begin our tailgate party, we learned that his seat was directly in front of ours.

In a stadium that seats over 60,000 people, he managed to purchase the one seat available in our section.

We hoped it was a sign of things to come.

Friends from California also arrived at the game, via train and taxicab, and texted me from the Patriots Pro Shop asking if we needed anything. My friend, Shep, had been taunting me about a hat he purchased weeks back, and so I took a photograph of the hat atop his head and asked the girls to buy it for me. They did, and then somehow we managed to find one another amidst the shanty-town of tents and Easy Ups that filled one of the many parking lots adjacent to the stadium. 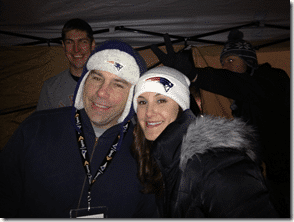 It was the most unlikely delivery ever. A plane from California to Boston, a train to Mansfield, MA, a taxi to Foxboro, MA, a walk to the Pro Shop, and then a delivery to our tail gate.

And it was well worth it.  The hat rules. 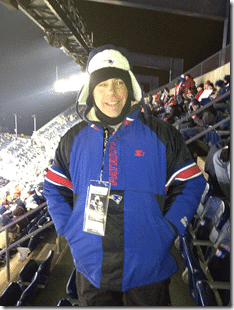 Oddly enough, our friends from Norway saw our friends from California in the South Street train station in Boston but didn’t know each other, so both groups eventually found their way to our tail gate party, where they reunited. 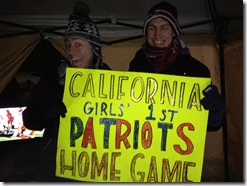 It was one of those strange days.

There were thankfully few Denver Bronco fans at the game, but I did have a run-in with one after he became enraged over a fellow Patriots fan’s derisive comment about his team allegiance.

“Why would you say something like that to me, man?” he yelled. “C’mon! I’m a Florida Gators fan, so I like Tebow.Why do you have to hate on me like that? What’s your problem?”

Clearly this guy had never been to an NFL game before. If he expected that he was going to be able to dress like an orange and not be berated, he was kidding himself.

The two guys looked angry and ready to fight (which happens from time to time at game), so I jumped in and explained, “Look, man. This is Massachusetts and we are Patriots fans. We don’t even like each other.  There’s no way in hell that we are going to like you.”

This caused the people around us to laugh and the situation to diffuse.

A few minutes later a Christmas tree labeled a Tree-bow was burned in effigy amidst the tents and grills in the parking lot. Drunken Patriots fans danced around the burning tree, nearly catching themselves on fire in the process.

You never know what is going to happen in an NFL parking lot.